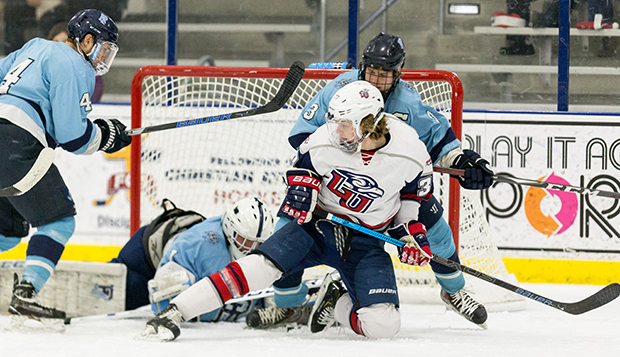 After going 4-for-4 on the power play to surge past the Rams in Friday night's ESCHL opener at Rhode Island, Liberty University's ACHA Division I men's hockey team's defense took center stage in Saturday night's rematch at Boss Arena, where the Flames finished 5-for-5 on the penalty kill to complete the two-game sweep with a 5-1 victory.

Liberty, tied for fifth in this week's ACHA DI national rankings, improves to 7-0 overall and 2-0 in ESCHL play while No. 21 Rhode Island falls to 3-2, 0-2 in conference action.

"That was big time," Flames Head Coach Kirk Handy said. "Josh is a guy who can find the back of the net. Rhode Island is a tough team and they worked hard and played us tough. It was a real tight game tonight until we started to see some better play in the third."

Liberty outshot Rhode Island 23-5 in the third period and 48-21 for the contest.

Fricks sandwiched his two goals at the 15:19 and 7:53 marks around one by sophomore forward Devin Melice, on a goalmouth scramble after winning a rebound battle midway through the third period.

Senior forward Quinn Ryan, who distributed three assists on Friday night, added two more, setting up the Flames' first goal by Zechariah Roberts with 18:03 left in the second period and Fricks' final score in the third.

With the two teams skating in four-on-four action, Rhode Island tied the game at 1-1 with 13:09 to play in the second period. Three and a half minutes later, senior defenseman Chaydan Lauber converted the go-ahead goal at the 9:25 mark off an assist from junior forward Jordan Bochinski.

"At the end of the day, it was a good opportunity to win two conference games on the road," Handy said. "Those are huge for us. It's big time to walk away with four points and it will be nice to get home and continue on in conference play next weekend."

The Flames will host Syracuse on Friday at 7 p.m. and Saturday at 2 p.m. at the LaHaye Ice Center in a rematch of the ESCHL Tournament championship game, won by the Orange in overtime.

"The big thing for us is to continue to concentrate on ourselves and not get too wrapped up on what other teams are doing," Handy said. "We want to focus on us and what we have in front of us." 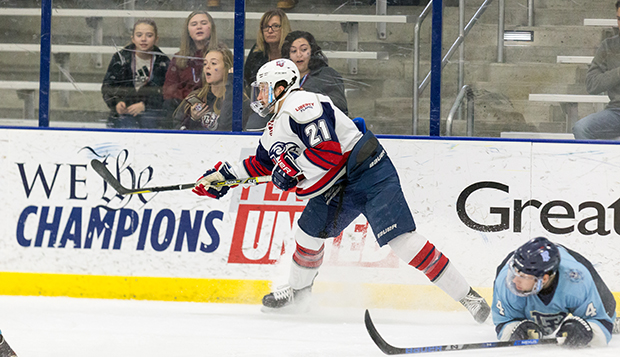 Junior forward Devin Pierce and the Flames will return to the LaHaye Ice Center next weekend.