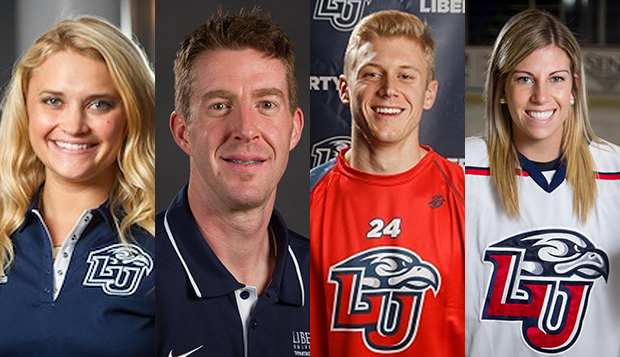 Rachel (Steele) Harrison (from left), Jeff Lowes, Kurt Tobias, and Sarah Stevenson, who will be honored posthumously, comprise the Club Sports Hall of Fame Class of 2019.

The 6-foot, 3-inch-tall Tobias, who emerged as Liberty's all-time leading scorer by the time he graduated in 2014, will be the men's lacrosse team's second inductee, following Jeremy Kortright in 2015. He was soon surpassed in the record books by teammate Ryan Miller ('16), who played on the same line of attack.

"Those two guys formed the most lethal combination in team history," Head Coach Kyle McQuillan said, noting that Tobias often capitalized off fast-break opportunities. "He had great vision and was a really smart guy and knew where to be, at the right time and the right place."

Harrison, who graduated with a B.S. in Clinical Health Promotions, was a co-founder and captain of Liberty's gymnastics team and competed in three National Association of Intercollegiate Gymnastic Clubs (NAIGC) meets, winning an individual national title on the balance beam in 2010. She was instrumental in developing the program and sending athletes to nationals, where she continued to compete in the alumni division before stepping down in 2015.

Lowes, a two-year captain for the Flames, earned ACCHL Forward of the Year honors one season and was selected to the Atlantic Coast Conference Hockey League (ACCHL) First Team twice, including after leading Liberty to its first ACCHL championship. He was Liberty's second player to be inducted into the ACCHL Hall of Fame earlier this year, joining former DII teammate and current Flames DI Head Coach Kirk Handy, who was inducted in 2015. Lowes served as Handy's assistant coach at the DII level from 2005-06, when Liberty advanced to the ACHA DII national championship game, and on the DI squad from 2006-12.

For the first time in the six-year history of the Club Sports Hall of Fame, a fourth inductee will be added posthumously — DI women's hockey all-American forward Sarah Stevenson.

Stevenson, who graduated in 2015 with a degree in criminal justice and a minor in psychology, was pursuing a career in law enforcement in her home province of Ontario when she died suddenly on Oct. 31, 2017, of a case of Neisseria Meningitidis. She helped guide Liberty to its first ACHA national championship in 2015 before becoming the ACHA's first player to be drafted by the Canadian Women's Hockey League. She was the Lady Flames' first player to sign a professional contract in the sport, spending the 2015-16 season with the Toronto Furies.