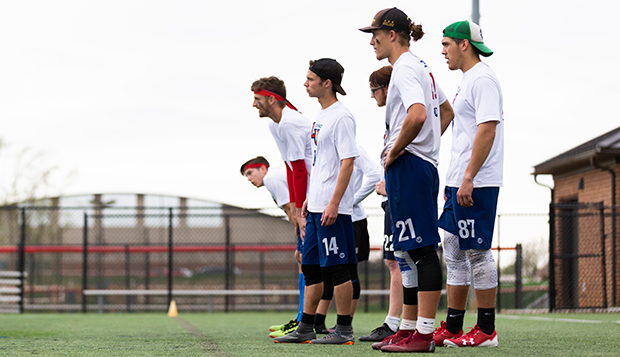 Liberty University's men's Ultimate team returned 14 of 16 players from last year's roster and added 12 newcomers, including those on the practice squad, during September tryouts.

"I'm really excited about the upcoming season," Flames junior cutter Daniel Mills said. "A lot of our new guys are actually learning really quickly. I really have high hopes for this season considering that we also have most of our returners coming back."

The Flames will open fall season competition this Saturday and Sunday at its Hill City Tune-Up — a round-robin tournament with championship and consolation games against two men's teams from Lynchburg and one from Roanoke — at the Liberty Mountain Intramural Complex.

"We've got to work on fundamentals and start from the beginning and get everybody caught up so we can move on to learn the more intricate things," Liberty second-year Head Coach Kevin Habermas said. "We have a goal set to win the (Virginia) conference this year, so we've got a lot of work to do. I'm very confident we can build on last year's team, from what we learned from that, and move on from the experiences we learned from regionals."

"This year, we're looking at top-five in our (Atlantic Coast) region and we would like to be in the position to be in a game-to-go scenario to (USA Ultimate) nationals," Flames junior handler Jacob Norman added. "That's our goal."

Liberty will travel to George Mason University for its only collegiate tournament of the fall, set for Nov. 9-10, a final tune-up before its official season starts in the spring.