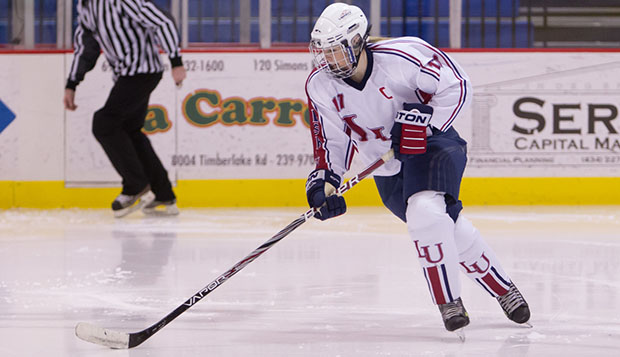 It was the second NCAA Division III team the Lady Flames (23-2) have defeated this season after vanquishing Stevenson University in Maryland on Nov. 3.

"We've never played this team before," Liberty head coach Paul Bloomfield said. "It was a good solid win for us. They're a better team than Stevenson, which is also in the same league."

The Cougars (4-21) scored first on a goal by Marie Soukup with 5:22 left in the first period before MacArthur netted her tying shot off assists from Carrie Jickling and Stacey McCombe.

"Jenny got two goals and an assist," Bloomfield said. "She's not a very big player, but she's a really consistent, strong player, very steady. You can count on her. She doesn't often make mistakes."

Just 3:44 into the second period, Chatham went back on top on a goal by Julia Hunter, assisted by Soukup, before the Lady Flames fired back 40 seconds later when Laura Del Monte finished off a feeds from Amanda Grainger and Keely Beisinger.

Finally, late in the third, MacArthur scored again, also off assists from Grainger and Jickling, before she and McCombe assisted Jickling on an empty-netter in the final 31 seconds, moments after the Cougars had pulled their goalie, Megan Buchanan.

"Their goalie was doing a good job and we just weren't getting it in until we got that third goal," Bloomfield said.

MacArthur got more playing time on attack because Bloomfield didn't start forwards Carly Peleshok and Sarah Stevenson due to injuries.

"Going into (the ACHA DI) nationals (March 6-10 in Ashburn, Va.), I need her healthy," Bloomfield said of Stevenson, who recently returned from a concussion before being bumped again in last Sunday's game against Raleigh. "(MacArthur) doesn't usually have this many goals because she can play defense and I often start her back there. She's a good worker. It was good to see her capitalize."

He said Chatham, despite its record, was a solid team.

"It was a good game," Bloomfield said. "We hadn't played that caliber of team the past three or four games so we had to work at it. We were pretty slow in the first period, after we were late in getting to the rink. But we rallied in the second period and outplayed them really well."

Liberty outshot Chatham 32-18 for the game, including 12-5 in the second period and 13-5 in the third. Sophomore Samantha Rupp started in goal for the Lady Flames.

Liberty will conclude its regular season with a rematch at Chatham, Sunday at 1 p.m.