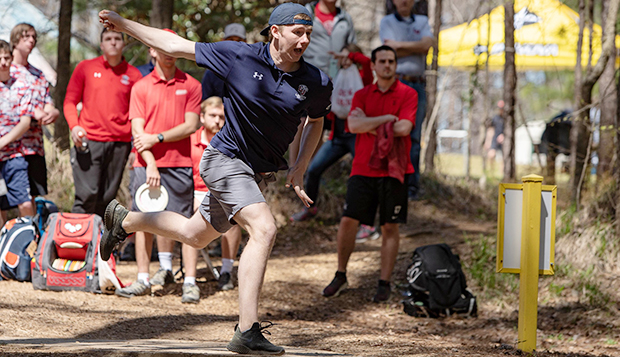 Four of the top players on Liberty University' men's disc golf team, which included two from the foursome that placed third at this past spring's National Collegiate Disc Golf Championships in Appleton, Ga., repeated their third-place finish at this past weekend's Dean's Cup in Rock Hill, S.C.

The top eight Championship Flights at nationals earned invitations to compete in the doubles tournament, hosted by Wingate University on the same 18-hole Winthrop Gold course as the U.S. National Disc Golf Championships, which was also played over the weekend.

"It was a small event, but it is meant to bring the best college players in the nation," Flames Assistant Coach Devin Swartz said. "Everybody played great and it is always exciting to watch the pros play at that level. To be there and play that course and see how difficult it is, it's humbling."

Liberty won Thursday's opening-round match against Wisconsin-Platteville, which only brought three players, with a combined score of 1-under par — 11 shots better than the Pioneers. In Friday's semifinal round, the Flames were tied with North Carolina State, the runner-up at nationals, going into the final hole before the Wolfpack advanced with a one-shot win at 5-under-par.

Finally, in Saturday's third-place match against Clemson, Liberty tamed the Tigers by six shots by firing at 2-under-par despite battling 20-mph wind gusts.

"We placed third out of eight, competing against some of the best teams you'll ever see," Swartz said, noting that NC State edged defending national champion Ferris State in the final. "It was encouraging. The tournament directors let teams bring players who had graduated from the teams they had put together for spring nationals. We wanted to get everybody experience and we were the only team there with four guys who will all be playing this year."

"The first two days we had the seniors playing together, who had really good chemistry because they knew each other really well," Swartz said, noting that the same was true for the incoming freshmen who are both from eastern Pennsylvania. "Then, we mixed them up for last day."

He said the course was even more challenging than the opponents the Flames faced.

"It was a good experience," Swartz said. "The competition was good, and it was the hardest course we could have played — super tight with out of bounds everywhere. There were not many trees, but they built some man-made obstacles and there was a lot of open, wind, and water hazards. On one hole, to get to the green, you had to go over the lake and pros were taking 7s, 8s, and 9s on that hole."

Flames players threw three discs into that lake on Sunday, but, thankfully, their partners stayed on course, so it didn't cost them in the best-shot doubles format.

Liberty will host Appalachian Bible College's first-year program in a friendly match on its two 20-hole courses this weekend, before giving all 19 of its players (13 men and six women) opportunities to play on Championship and First and Second Flight teams in the Nov. 9-10 Flamethrower Invitational.

Liberty's Championship Flight stands behind Clemson (in orange), which it defeated for third place.