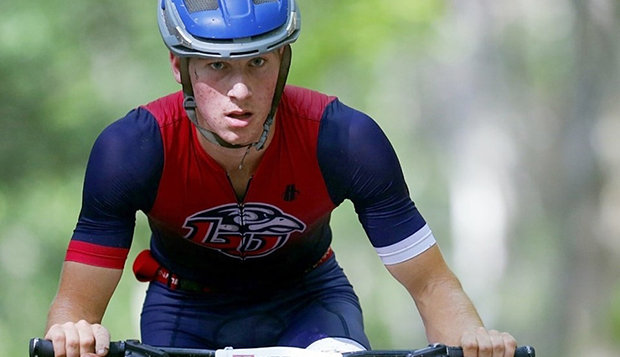 The 750-meter swim, 20-kilometer cycling stage, and 5K run took place on and around the Trump National Charlotte golf course. Galbraith completed the course in 1 hour, 1 minute, 24 seconds, highlighted by the second-fastest time on the bike in 30:20. Graduate Mark Fairley placed 13th overall on the strength of his 5K run split of 16:51, the fastest among collegiate men.

The Flames finished second as a team behind Queens University of Charlotte, one of their top contenders in the Mid-Atlantic Collegiate Triathlon Conference (MACTC), which recorded 10 of the top 11 times. Graduate Grant Merry (1:14:37) and freshman Ben Pannell (1:15:31) also placed in the top 25.

Liberty, which will host the MACTC Regional Championships on Oct. 19 at Smith Mountain Lake, placed ahead of Virginia Tech, Clemson, South Carolina, and North Carolina State in the team standings.

"This was an ‘extra' race for us and we only took about half of the team," Head Coach Heather Gollnick said. "We wanted to give those who were here for Fall Break an opportunity to race again before our Conference (Championships) in two weeks."