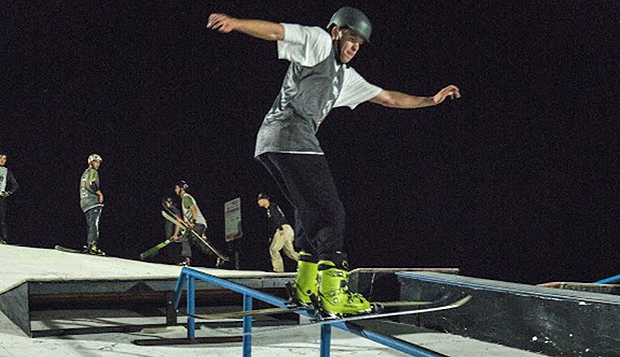 To elevate the level of competition in the two-month tryout period for Liberty University's men's and women's ski & snowboard teams this semester, Head Coach Isaac Gibson scheduled three open events at the Liberty Mountain Snowflex Centre, starting with a Sept. 27 Rail Jam over College For A Weekend (CFAW).

"We always have a good student turnout over CFAW and we have had guys riding and doing demos, but have never held an official contest," Gibson said. "It was really cool for the athletes and the students and spectators and really helpful being able to see the riders not only in a practice situation, but in a competition situation, to see if they're going to be able to perform under pressure."

Even with temperatures still reaching the 90s as late as early October, the Flames and Lady Flames have been able to get a jump start on their Southeast Regional competition with practices at Snowflex.

"We have been out there five days a week practicing and getting ready for the winter season ahead of us," Gibson said. "That is one incredible advantage we do have with Snowflex, just being able to have a full two and a half months of practice before any other teams are even able to get out on snow."

He has been extremely pleased with the turnout for tryouts this fall, and will have an unusually difficult time selecting his travel rosters.

"I am very, very encouraged," said Gibson, who has 15 women (eight snowboarders and seven skiers) and more men's snowboarders than ever before trying out for this year's team. "It is cool to see it growing, especially on the ladies side of things, which had been low in numbers before last year, when we had a full three-woman ski team for the first in program history. This year, we hope to have three snowboarders and three skiers for the first time."

"Because progression is so fast at Snowflex, we do two months of practicing before we decide who is going to be on our travel teams," Gibson said. "After two months of training with us, riders can be very much at a competitive level, especially on the female side of things. We want to make sure we're taking the people who will make us most successful and who have been the most committed."

In previous years, the difference in skiing and riding ability among those trying out who make the travel team and those who do not make the cut has been drastic.

In the 20-contestant men's snowboard event, sophomore Noah Austin, a Lynchburg resident who learned how to snowboard at Snowflex but sat out his freshman season after breaking his ankle on the aerial awareness trampoline, finished first followed by junior Owen Hewitt and freshman Max Ozanne.

Zach Vance, who is from nearby Rustburg, Va., and learned to snowboard at Snowflex, won the youth snowboard division, followed by Zach Clawson from Northern Virginia.

The next open event at Snowflex will be a Big Air competition on Halloween night, Oct. 31, with a costume contest scheduled for non-riders. A final Slopestyle event will take place on Nov. 8, the Friday of the fall semester's final CFAW weekend.