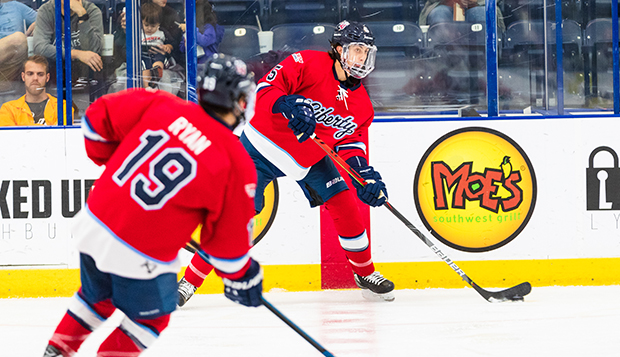 The Flames took care of business on their first road trip, completing a weekend sweep and raising their non-conference record to 5-0, despite giving up two goals on the penalty kill.

"Looking at the weekend, we see some ups and the downs, but overall, we're trending in the right direction," Liberty Head Coach Kirk Handy said. "The big thing for us is putting 60 minutes of hockey together. There were times tonight when we looked strong, and other times when we weren't as dialed in as we want to be. Our PK has been good to this point, but we've got to continue to refine our game, to learn from our mistakes, and make sure we're getting better."

Freshman defenseman Colin Baird started the scoring for the Flames off an assist from junior forward and head captain Devin Pierce before senior captain Garrett Nelson scored unassisted to push Liberty's lead to 2-0 by the end of the first period.

Just 25 seconds into the second, graduate forward Zechariah Roberts extended the Flames' edge to 3-0, and Laukaitis netted his first power-play goal off assists from Nelson and senior forward Quinn Ryan for a commanding 4-0 advantage.

Alabama ended the shutout with its first goal of the weekend late in the second period and then trimmed the deficit to 4-2 early in the third. Laukaitis then finished feeds from Ryan and sophomore forward Josh Fricks with the Flames back on the power play, increasing their lead to 5-2.

Ryan capitalized on another man advantage just seconds after a Crimson Tide penalty, and Pierce converted assists from senior forward Brock Thompson and Ryan to expand the gap to 7-2.

Alabama's Jacob Nau netted a power-play goal with just under 6:00 to play, trimming the deficit to 7-3, before Ryan capped the scoring off another Thompson assist.

"Brock Thompson worked hard for us all night and Garrett (Nelson), Quinn (Ryan), Roberts, and Josh Hamilton all played well so there were some encouraging signs," Handy said. "We realize it's only October, so we need to make sure we're continuing to get better between here and March."

Four days after returning from Alabama on Sunday, the Flames will embark on another 10-hour road trip, this time to Rhode Island for a series on Friday and Saturday at 7 p.m. at Boss Arena.

"We start our (ESCHL) conference play next weekend, so it is important we come out and play well," Handy said.