DI Flames rise to No. 7 in nation before traveling to Alabama 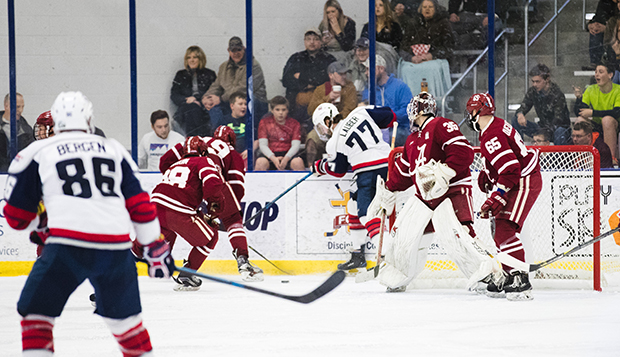 Prior to embarking on a 10-hour trek to Alabama on Thursday for its first road trip of the 2019-20 campaign, Liberty University's ACHA Division I men's hockey team moved up one spot to No. 7 in this week's first regular-season rankings.

The Flames (3-0) have won their past five meetings against the Crimson Tide, all of which have been played at the LaHaye Ice Center.

Liberty will only have a 20-man roster available for this weekend's series in Alabama as four of its 15 forwards didn't make the trip due to injuries.

"We're banged up and have a couple guys out, but we're going to make our adjustments and keep going," Flames Head Coach Kirk Handy said. "I really like the 20 players we're bringing. We believe in all the guys on our roster and have confidence in all of them and that we will be able to execute well this weekend."

Series record: Liberty extended its lead on the Crimson Tide to 7-3 by sweeping the past two series, including last year's regular-season-ending series, after splitting the previous three from 2016-18.

Liberty scouting report: The Flames have outscored their first two opponents by a combined score of 27-3 through three games, with sophomore goalie Tyler Myers posting a shutout in his Liberty debut — Saturday morning's Midnight Mayhem matchup, a 6-0 victory over IUP. Freshman Cédric Le Sieur was 2-0 with a 1.50 goals-against average in his first two starts in the blue paint.

Senior defenseman Garrett Nelson scored the first two power play goals of the season for the Flames, one in both games against IUP, and assisted the third, scored by senior forward Brock Thompson. Liberty finished 3-for-5 on the power play in the rematch with the Crimson Hawks after going 1-for-7 in its first two games.

Liberty's six newcomers have all contributed, with forwards Arturas Laukaitis and Matt Bartel and defensemen Colin Baird and Dmytro Kobylyanskyi making immediate impacts on both ends of the ice.

Alabama scouting report: The Crimson Tide slipped out of the ACHA DI Top 25 after splitting its series with Robert Morris University last weekend at home, losing the opener 3-2 before rallying from a 3-2 deficit to win the rematch in overtime, 4-3. Alabama lost its season-opener at ACHA DI National Championships qualifier Buffalo, 4-1.

Three of the Crimson Tide's top four scorers from last season return — forwards Nick Messina, Taylor Joseph, and Jacob Nau. But they have yet to score through three games while five of their teammates have netted goals—forwards Taylor Bowman, Jake Furry, and Quinn Fahey and defensemen Brian Seybold and Caelan Briere.