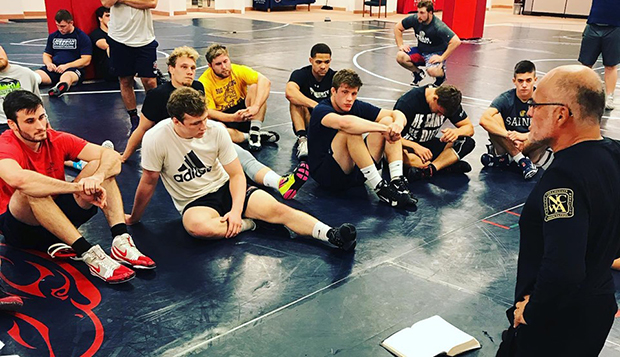 Flames Head Coach Jesse Castro leads a Bible study on the story of Jacob near the end of Saturday's annual challenge.

Liberty University's wrestling coaches cut Saturday's annual preseason rite of passage known as "Jacob's Challenge" from 24 to 12 hours — from noon to midnight — to reduce the recovery time while increasing the payoff from the grueling marathon workout sessions.

"We ramped the intensity up to compensate and the guys crushed every hour," Flames Assistant Coach Chris Williamson wrote on the team's Facebook page. "Another successful Jacob's Challenge in the books."

Head Coach Jesse Castro said the returning wrestlers welcomed the change, and the newcomers rose to the challenge with their encouragement.

"In the past, the last six hours were very non-productive in that we were doing everything we could just to keep them awake," Castro said. "This year, the 12 hours we had with them was quality time. It was just long enough where I felt it was more productive and we got more benefit out of it as opposed to being counterproductive, where we were just beating them down after 24 hours."

Workouts in the team facility at River Ridge Mall included plenty of instruction, circuit training with dumbbells and medicine balls, as well as body-weight training such as pushups and pullups.

A change of venue to the Liberty Mountain Intramural Complex late in the day gave the wrestlers a breath of fresh air and outdoor exercise that included a four-team Ultimate tournament and 25 minutes of lap running around the complex.

"We ended up going over Jacob's story from the Bible back in the wrestling room before finishing with a grind, a 12-minute live match, and called it a day," Castro said. "It was a great time of team bonding and developing closer relationships, especially among the first-year wrestlers."

Of the 31 members of this year's team, 13 are newcomers — seven recruits and six walk-ons.

"We're really excited about these new guys coming, including a few surprises," Castro said. "The key recruits, we expected them to be talented, but there were a couple we didn't expect who have some good potential. They really seem to have bought into the system, which has been fun to watch."

Blake Barrick, a transfer from NCAA Division I American University who redshirted his freshman season, and Sean Gillespie, a walk-on who was New York's Greco Roman champion, will challenge defending national champions Sam Karel and Austin Amos for starting roles at the 184- and 197-pound weight classes. Liberty will also return former freshman All-American Joe Scott, a junior 165-pounder who transferred back from Washington & Lee.

"We have so much depth between 165 and heavyweight," Castro said. "They'll be in the heat of the battle with those returning national champions. It is so early and we want to see them compete, which will tell us a lot. As far as their pedigree and their work ethic, it's pretty encouraging, across the board."

With the season-opening Messiah Invitational on Oct. 2 in Mechanicsburg, Pa., a month away, the Flames have increased their practices from four-five to five-six per week.

"We're going to be competing in a month so practice intensity has been picking up, which is encouraging," Castro said.

Josh McIlhenny, a captain on the past two years' teams, replaces Larry Cannon as a graduate assistant this season.

"He knows the system so don't have to worry about the transition," Castro said. 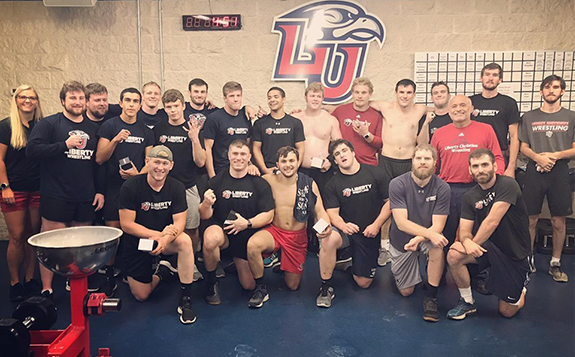