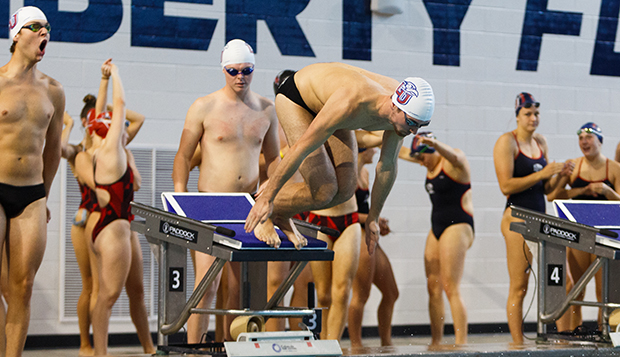 A Flames swimmer prepares to leap off the starting block while cheered by teammates and members of Liberty's NCAA Division I women's swim team on Saturday. (Photos by Luke Bobbey)

Liberty University's men's swimmers finished first in 14 of their 16 individual and relay events at Saturday's co-ed exhibition meet against the University of Lynchburg, a first-year men's and women's NCAA Division III program, at the Liberty Natatorium.

"Across the board we did really well," Liberty second-year Head Coach Heath Grishaw said. "It was awesome, a really good meet. We were pleased with how well the guys did and just seeing the overall success of the team was really exciting. But we know that there's a lot of growth and a lot of learning that we still have to do. We had a lot swimmers qualify for nationals, but still have many more to go."

Liberty swept all of the men's relays and also combined with members of Liberty's NCAA Division I women's swim team to win all three of the mixed relays.

"That was really fun to be able to support each other and race alongside each other," Grishaw said. "I talked to (Lady Flames Head Coach Jake (Shellenberger) and (University of Lynchburg Head Coach) Brad (Dunn) and we want to make this an annual thing. It was an awesome opportunity for us to swim at that level and a chance to come together and race in the same pool we call home."

Libby also won the 100 breast stroke in 1:02.64, and Mallory placed second to Davidson and Fernandez in the 50 free and 100 free, respectively.

Liberty has less than two weeks to prepare for the Oct. 12-13 Eastern Regionals at the University of Maryland in College Park, Md.

"It is still early in our season and the guys are still adapting to training," Grishaw said. "We are just excited to go to a championship meet where they get to get fully suited and tapered."