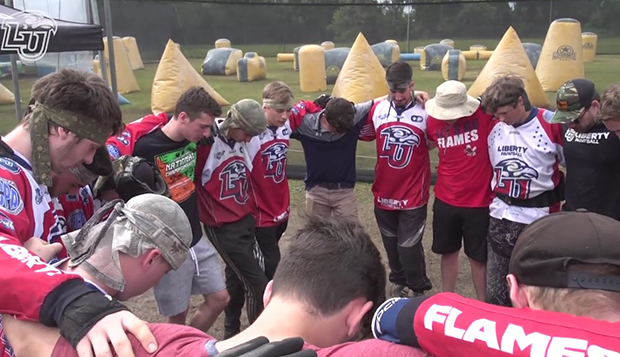 Plenty of unproven players on Liberty University's paintball team will be tested by fire on Sunday when the Flames compete in their season-opening event, the Eastern Paintball League's (EPL) East Coast Cup, a Division 3-5 tournament in Chesapeake City, Md.

"This is a pretty large tournament with 23 teams from the North, Mid-South, and South conferences," Liberty Head Coach Brian Davidson said, noting that Liberty competed in an EPL South Conference Open event held in Chesapeake, Va., in late March as a tune-up for nationals. "It's a non-collegiate tournament with a lot of teams we've never seen and they have never heard anything about Liberty. So it is another opportunity to share our faith and a little bit about us, who we are and what we stand for."

"This is definitely a rebuilding year after we lost pretty much our whole starting line to graduation," he said. "We have three new guys this year and a few guys are stepping up from the second line."

One of the newcomers, Davis Lowry, will make his first start on the Gold line this weekend.

"He's got a little more experience from playing back in high school before going into the military, so this will be his first tournament in a while," Davidson said.

"Ethan is definitely one of the players who is filling the shoes of last year's starters really well," Davidson said. "We have been seeing a lot of improvement over the past year and think he is going to be a good fit for the top line."

He likes the way the Red line call-ups have developed chemistry in the preseason.

"There is a lot of experience there still," Davidson said. "They just haven't had their opportunity to compete at that high level yet. Now that they're in position to fill roles as starters this year, I am excited to see how they do at this first tournament. I have a lot of confidence in those guys. I'm excited."