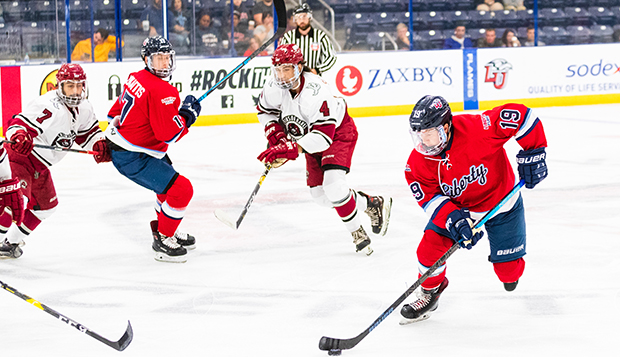 Liberty University's eighth-ranked ACHA Division I men's hockey team continuted to refine its execution and recorded a 10-2 triumph over Indiana University of Pennsylvania on a rare Thursday night matchup at the LaHaye Ice Center. The Flames (2-0) outshot the Crimson Hawks (0-3) by a 63-15 margin and held a commanding 45-17 advantage in faceoffs.

"We were able to generate some offense tonight and get lots of shots on goal," Liberty Head Coach Kirk Handy said. "Our guys came to play and played well tonight. I was proud of the effort. For the most part, they stayed out of the (penalty) box and we had contributions up and down that lineup."

Sophomore forward Josh Fricks netted his second consecutive hat trick, starting with the only two goals of the first period.

"Josh Fricks scored three goals, but he did a lot of other things out there on the ice that were effective tonight for us as well," Handy said.

Seven other Flames scored, including senior defenseman Garrett Nelson, who was one of three players (senior forward Quinn Ryan and junior forward Devin Pierce being the others) to distribute two assists.

Liberty's lightning-quick-strike offense needed only a minute and 33 seconds to get on the scoreboard in the opening period, demonstrating textbook execution on a fast break. Freshman defenseman Colin Baird sparked the transition with a short pass to Nelson, who skated up to the red line before releasing a short pass to Fricks. He maneuvered through the right slot and split two Crimson Hawks defenseman before pocketing the puck in the top right corner of the cage for an early 1-0 edge.

Fricks gathered a loose puck along the IUP bench and struck again unassisted at the 4:32 mark, beating Crimson Hawks goalie Tyler Kurtz by tucking in a putback of his own shot that had clanged off the crossbar.

With the Flames on a power play early in the second period, Nelson extended Liberty's lead to 3-0 at the 15:29 mark, skating from behind his own net coast to coast up the right wing and lifting a sharp-angled wrist shot over the glove of Kurtz.

Just two and a half minutes later, senior forward and assistant captain Brock Thompson worked a fast-break give-and-go with sophomore forward Matt Bartel, who sent a beautiful return pass across the slot to the tape of Thompson's stick for an easy tap-in at the left post for a 4-0 advantage.

"Brock and Bartel have some chemistry and they showed it tonight," Handy said.

Tic-tac-toe passing resulted in the Flames' fifth goal when senior defenseman Jacob Fricks sent the puck to sophomore forward Devin Melice in the right circle and he one-timed his assist to senior forward Andy Clarke for a point-blank finish in the left crease with 7:42 remaining in the period.

Freshman forward Arturas Laukaitis scored his first goal a minute later off a short assist from Ryan, who skated the puck through the right circle and passed it across the slot, where Laukaitis lifted a wrist shot past Kurtz top shelf.

"That was a fantastic shot," Handy said.

The Crimson Hawks ended Flames freshman Cédric Le Sieur's shutout bid with a power-play goal at the 2:34 mark when defenseman Gavin Cummings sent a pass from near the left post to forward Dominick Glavach in the right circle for a sliding shot that sneaked inside the right post.

Liberty started the third period with more than a minute left on a five-on-three power play, but couldn't cash in until seconds after an IUP penalty kill, stretching the lead to 7-1 at the 18:16 mark on Jacob Fricks' top-shelf slapshot from the point off an assist from junior forward Jordan Bochinski.

Senior forward Zechariah Roberts deflected in defenseman Chaydan Lauber's shot while falling backwards into the cage to extend Liberty's lead to 8-1 with 15:44 to play.

Hunter Lanetz took advantage of a failed clear in the Flames' defensive zone by rocketing a bar-down slap shot from deep in the slot to trim the deficit to 8-2 with 13:36 to go. But Liberty struck right back at the 12:12 mark when Josh Fricks one-timed Ryan's feed from along the back boards past Kurtz. Bochinski capped the scoring with 5:44 to go by using quick reflexes to redirect Baird's entry pass from the left crease.

The Flames and Crimson Hawks will meet in their fourth Midnight Mayhem matchup in as many seasons on Friday at 11:59 p.m., webcast live by LFSN and carried on ESPN+.

"We've got to put this one behind us and come to play tomorrow night," Handy said. "I'm sure the atmosphere will be great and our guys will respond well. To us, it's more who we are and who we want to become as a team this year and our guys are really focused on that." 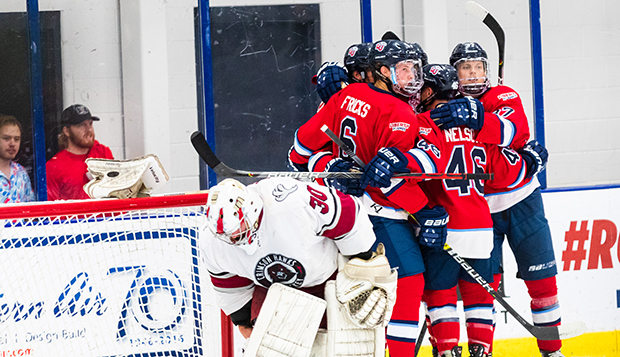