Swimmers out to make splash at co-ed exhibition meet vs. UL 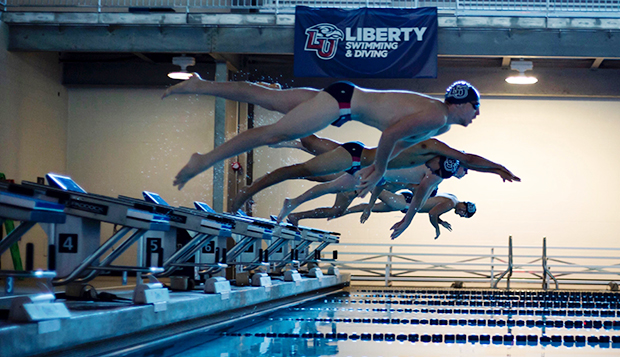 Flames swimmers leap off the starting blocks in a recent practice at the Liberty Natatorium. (Photo by Dan Flittner)

"National standards have not come out yet, but hopefully, we will qualify everyone, and as many as we can qualify, we will bring to nationals," Grishaw said of the April 9-13 event to be held at the Greensboro (N.C.) Aquatics Center.

"Last year at nationals, we only had 10 guys and a lot of them were stacked in different events," Liberty senior distance swimmer Ben Klipp added. "This year, we should have someone in each event, which is exciting. It will be a challenge, but our goal is to get top-five as a team."

Grishaw and first-year Assistant Coach Peter Wakeley will put the swimmers through their first test this Saturday at 10 a.m. when the Flames and NCAA Division I Lady Flames host the University of Lynchburg's first-year NCAA Division III men's and women's teams in an exhibition meet at the Liberty Natatorium.

"I can't wait to see what we are able to do at that meet," Flames freshman sprint freestyle and backstroke swimmer Matt Davidson said. "I know all of us are ready to swim fast."

"He's been great," Grishaw said. "He has done swimming research into what's going to make us strong, mobile, and fast in the water and I am super confident in what he's got cooked up this year."

Wakeley has helped tailor workouts for Liberty's eight distance swimmers, based on his history as an NCAA Division I swimmer at Gardner-Webb University.

"He's been phenomenal, a huge blessing," Grishaw said of Wakeley, who works with 200-yard Individual Medley and 500 and 1,000 freestyle swimmers. "He was a distance machine at Gardner-Webb and knows what helped him and his teammates thrive and is taking that knowledge and applying it here. In our first few weeks of practice time, the guys have raised the bar to a whole new level."

Grishaw has focused on training the Flames' sprinters, including Davidson, who will compete for a bid to next summer's U.S. Olympic Trials at the Dec. 4-7 Toyota U.S. Open in Atlanta, formerly known as the Winter National Championships.

"He has a really good shot of making it to the Olympic Trials in the 100 backstroke," Grishaw said, noting that he will also compete at the meet at Georgia Tech in the 50 and 100 free. "He's a special swimmer. He's got a lot of potential, and he is walking around with a whole different level of confidence. On the club swimming level, I could see him being a national champion in three or four of his individual events."

Returning swimmers include seniors Charles Fernandez, who Grishaw will help coach in the modern pentathlon when he represents Guatemala at the 2020 Summer Olympics in Tokyo next July, and Noah Miller, who joins sophomore Caleb Rice and Klipp in the distance events. Flames sprinter Dan Flittner is recovering from shoulder surgery and will join fellow junior Matt Sonnen, who will miss the fall schedule due to Army ROTC commitments, when he returns for the spring semester.

"It starts with them, leaders who have been with me for a season or two," Grishaw said. "They know how I like to run the ship and they have survived and they're bringing these new guys alongside them and showing them the ropes. They all have something special and bring something different to the table. We're just excited about what we're going to see (at Saturday's exhibition meet)."

For this season's team verse, Grishaw selected 1 Corinthians 3:13, which ends, "Fire will test the quality of every man's work."

"I tell the guys every day, every week spots are open," Grishaw said. "I reward hard work and if someone's going to work hard every single day, I might give them a shot."

But keeping his swimmers competitive in the pool is not his primary objective as a coach.

"My job here on earth is not to make these guys fast in the water, (but) to bring them closer to the Lord by the way I live every day," Grishaw said. "I'm here to make these guys better men, more Christ-like and better husbands and fathers. If I'm doing what I'm called to do, the coaching and making them faster will come."

"Fire Tested" is the team motto, and that should ring true based on Liberty's strength of schedule this season. After vying for national qualifying times at the Oct. 12-13 East Regional Championships at College Park, Md., the Flames will compete at a CCS meet at Elon University on Oct. 26 before concluding the fall schedule at North Carolina State on Nov. 1. 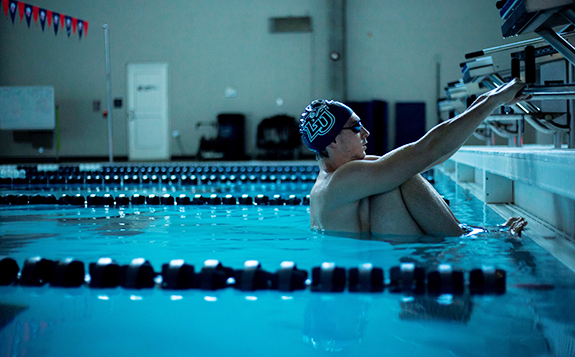