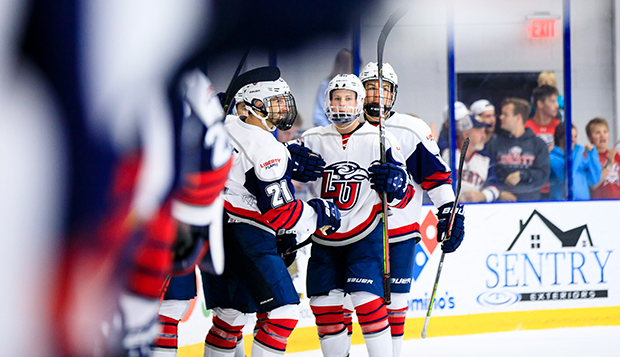 For the fourth season in a row, Liberty University's ACHA Division I men's hockey team will host Indiana University of Pennsylvania (IUP) in a Midnight Mayhem matchup on Friday at 11:59 p.m. at the LaHaye Ice Center.

Before that late-night affair — the first of two midnight matchups scheduled this semester coinciding with College For A Weekend (CFAW) — the Flames will play a rare Thursday night game against the Crimson Hawks.

"We have a short week — Monday, Tuesday, Wednesday practice and back at it on Thursday," Head Coach Kirk Handy said after Liberty's 11-1 season-opening rout of Duquesne, another Collegiate Hockey Mid-America (CHMA) opponent, last Friday night at home.

Despite the lopsided victory, Handy and his coaching staff saw plenty of room for improvement, which they hope to see the Flames implement in this week's series against IUP.

Liberty Scouting Report: The Flames have won five of their past six Midnight Mayhem contests over the past four seasons, including all three against IUP. They showcased plenty of offensive firepower in last week's opener, with sophomore forward Josh Fricks netting his first hat trick as a Flame to go with two assists, junior forward Jordan Bochinski adding two goals, and senior forward Quinn Ryan scoring one goal and distributing three assists.

Defensively, Liberty seniors Jacob Fricks and Garrett Nelson showed poise under pressure as they sparked and finished a few Flames fast breaks with a score and two assists, respectively, while newcomers Colin Baird and Dmytro Kobylyanskyi made immediate impacts on both ends of the ice.

In goal, freshman Cédric Le Sieur won his first start and will be between the pipes again on Thursday night before sophomore Tyler Myers saves his Flames debut in net for Friday at midnight.

IUP Scouting Report: The Crimson Hawks were swept at West Chester, a former ESCHL foe of the Flames and current CHMA rival, by 5-2 and 3-2 scores in their ACHA openers last weekend. IUP returns its top seven scorers from last season, led by senior forward Mike Longhitano (12 goals, 20 assists in 2018-19), and sophomore forward Dominick Glavach (18G, 11A).

All-Time Series: Liberty holds an 8-0 lead on IUP in a series that only started in 2015. 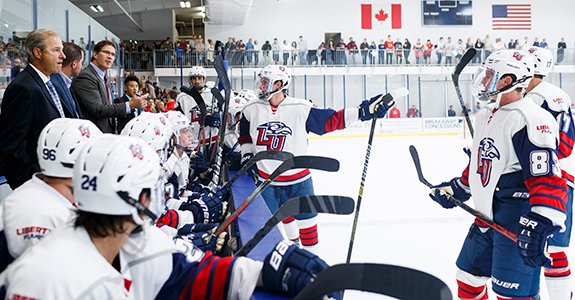 Liberty's coaches give Flames players direction from behind the bench last Friday at home.