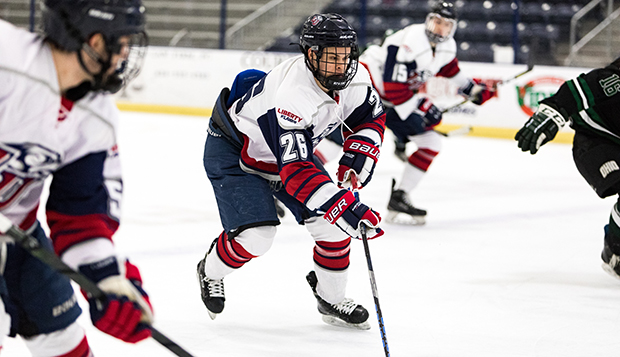 Liberty University's ACHA Division II men's hockey team will get a good first test when it opens its regular season Saturday at 1:30 p.m. in the LaHaye Ice Center against the same Duquesne University squad that the Flames' DI lineup battles on Friday night.

Third-year Head Coach Ben Hughes returns a solid core of impact players and believes he has the depth of talent and endurance to go the distance as the Flames seek to return to the ACHA DII National Championships for the second time in three seasons.

"We have 10 new players, three of which were DIII players last year," Hughes said. "We are really deep up front, where we have added some firepower. With the guys we have coming back, we have four full lines of forwards that are going to play, so we are excited about that."

"That will be one of the hardest-working and most tenacious lines," Hughes said. "The key thing for them is the speed of that line, and the tenacity and compete level to win the puck back."

"We have a solid group of defensemen that can all skate and move the puck really well," Hughes said. "We're going to rely on all of them to be anchors. They're all going to play a lot of minutes and we feel very confident and comfortable with all of our defensemen."

In goal, junior Adam Partridge, who will represent Liberty at the Student Hockey Challenge in Russia from Oct. 1-6, is backed up by sophomore Dakota Cyhaniuk.

"Adam's compete level as a goalie is one of the highest on our team and he has continued to progress throughout the year," Hughes said, noting that he led Mid-Atlantic Collegiate Hockey (MACH) goalies last season with a 93.1 save percentage. "We are blessed to have two extremely competent goalies who have pushed each other, and we're going to rely on both of them heavily."

Overall, Hughes and his staff that includes assistant coaches Christian Garland and Matt Cruickshank are excited about the season ahead, starting with an 11-game homestand.

"Every coach thinks they have the best team at the beginning of the year," he said. "We want to make sure we get better every day, learn as much as we can, and continue to progress towards playoff hockey."

After Saturday's duel with the Dukes, the Flames will entertain Virginia on Sunday at 2:30 p.m. before hosting a Sept. 27-28 series against Ohio, an Oct. 4-5 MACH season-opening showdown with Penn State, and an Oct. 9-11 Liberty Fall Showcase capped by a rematch of a 4-1 Southeast Region final setback to North Carolina State.

Liberty will look to atone for a 4-2 MACH Tournament championship loss to the Ice Lions and secure a sixth nationals bid in the past seven seasons by finishing ranked in the top two in the Southeast Region or winning twice at the Feb. 28-March 1 tournament.