Flames ready to rock rink in Friday's opener vs. the Dukes 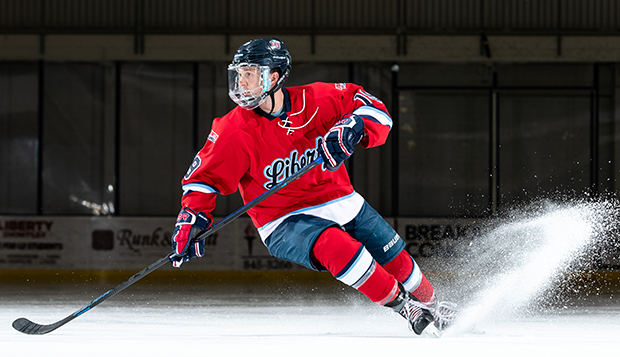 Senior forward Quinn Ryan is the Flames' top returning scorer and one of Liberty's all-time leaders. (Photo by KJ Jugar)

It has been nearly 10 years since Liberty University's ACHA Division I hockey team hosted Duquesne University, the Flames' season-opening opponent on Friday at 7 p.m. at the LaHaye Ice Center.

The Dukes compete in the same conference as Slippery Rock and Indiana University of Pennsylvania, two opponents on the Flames' home schedule this fall. Liberty will face IUP next Thursday at 7 p.m. and Friday, in the first of two Midnight Mayhem matchups of the semester.

Head Coach Kirk Handy and the eighth-ranked Flames are eager to get the season under way after more than a month of preseason camp, highlighted by multiple intra-squad scrimmages.

"I feel really good about our team and where we're at," Handy said. "We're more focused on our effort and execution than we are about what Duquesne's going to be doing. The expectations are there, not only from a coaches' standpoint, but from our guys. They expect to come out flying, to come out and execute at a really high level."

Liberty Scouting Report: The Flames, who have won six of their past seven season openers, feature an extremely deep and experienced lineup led by 12 seniors who have taken the team to three ACHA DI National Championship bids, two ESCHL regular-season titles, and two ESCHL Tournament titles in the past three seasons.

Duquesne Scouting Report: The Dukes, who finished in second place in the College Hockey Mid-America (CHMA) standings for the second time in three seasons last year, opened the 2019-20 campaign with a 5-2 setback to Canisius College at its Alpha Ice Complex in Harmar, Pa., a suburb of Pittsburgh where Duquesne is based.

They are led by senior center Sean Lloyd, a team captain, as well as junior center P.J. Breslow and junior defenseman Danny Bigley.

"We play an up-tempo, aggressive style of hockey, both offensively and defensively, and try to play a complete game," said fourth-year Head Coach Conrad Waite, who played for Duquesne when the Flames hosted the Dukes twice from 2005-07. "We're excited to renew the history between the two teams. It's early in the season, so it will be nice to travel and play a top-10 team out of our conference and good to see what we have and how prepared we are."

Coaches: Handy is in his 20th season as the Flames' head coach with an overall record of 432-180-29. Waite, who led the Dukes to three CHMA championships and two ACHA DI national bids as a player before serving for four seasons as an assistant coach at conference rival Robert Morris (Pa.), is 46-44-4 in his fourth season as Duquesne's head coach.