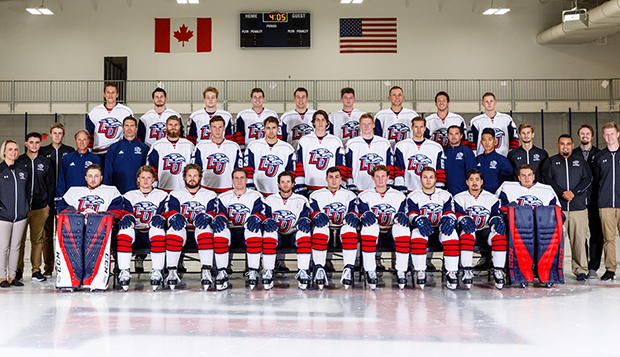 Veteran leaders abound on Liberty University's ACHA Division I men's hockey team this season, with exactly half of its roster — 12 out of 24 players— seniors.

"Up and down the lineup, we have an experienced group of guys and real strong leadership on our team," said Flames Head Coach Kirk Handy, a veteran himself as he enters his 20th season at the helm.

"It's been a real collective effort," Handy said. "I like our team cohesiveness and the balance we have up and down our lineup. Our leadership core is strong and they're committed to being the best they can every day right now and any guy who is called upon can answer the call."

Offensively, the Flames' attack will be bolstered by Arturas Laukaitis, a sophomore transfer originally from Russia. Defensively, the addition of Dmytro Kobylyanskyi from Ukraine, who was Laukaitis' former teammate at NCAA Division III Wisconsin-Stout, has strengthened a D-corps anchored by seniors Josh Bergen, Jacob Fricks, Chaydan Lauber, Garrett Nelson, and Basil Reynolds.

"Our senior guys have been fantastic with the newcomers, of getting them up to speed quickly — not only with the execution part, but with the effort and compete part," Handy said. "They've been great about sitting them down and pushing them to understand what Liberty's about, what the culture of our team is about, and what it's going to be like to compete on Friday night. We're pushing them to be self-motivated, and to have their individual goals within our team goals, and to be their absolute best."

The two-time-defending ESCHL regular-season champion Flames had their streak of back-to-back ESCHL Tournament titles snapped by Syracuse, which recorded their seventh consecutive overtime win in as many games in the championship final.

"We're all kind of more hungry this season, just because of that double-overtime loss that we had to Syracuse," graduate forward Zechariah Roberts said. "With the 12 seniors going out, they'll want to go out on top and a perfect way to do so is to get that title back, not only win the regular-season again, but the (tournament) championship as well."

The regular-season title is actually more important as it secures an autobid to the ACHA DI National Championships, set for March 20-25 in Frisco, Texas. Last year, Liberty would have qualified anyway, based on their No. 8 ranking in the final ACHA DI computer poll, which is the same spot the Flames debuted in last week's preseason coaches' poll.

"Most of our team has had experience at nationals," Fricks said. "We all know what it takes to get there. We've been there for the past three years in a row. Last year, we won our first game (7-2 over ninth-ranked Arizona), which was a huge milestone for us, but looking forward to this year, we need to expect to go further. We have the talent to do so if we all come together and work together."

"We have pretty lofty goals," senior forward Jordan Bochinski added. "Everyone looking from the outside in, from the coaching staff to fans and family — everyone — they kind of know this is a special year. It's a special group. We have a close-knit group as well and it's going to be a lot of fun. We know exactly what we need to do, physically and mentally, to make a run come national time."

As Liberty Hockey celebrates its 35th year, Handy believes the Flames are ready to take the next step in their pursuit of the program's first national title. Their journey back to Texas begins with Friday's 7 p.m. season opener against Duquesne University at the LaHaye Ice Center.

"Friday night will be a really good litmus test for us," Handy said. "We're looking forward to seeing the hard work put into a game situation and executing at a high level. It's a long season and you have to win each day and get better each day. The important part for us is going to be to continue that effort, energy, and momentum throughout the whole season. We don't want too far ahead of ourselves — 100 percent of our focus is going to be on Friday night. The guys are excited and ready to get going."