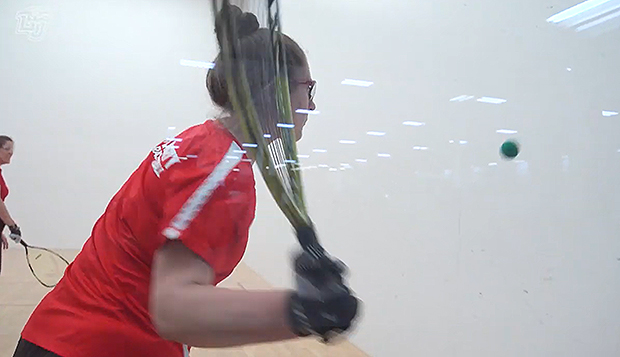 Lady Flames senior Malia Kramolisch, one of only a few returning players, digs a shot out of the corner in a recent practice.

Graduation took a large toll on Liberty University's men's and women's racquetball teams, with 11 seniors and two graduate students gone from an 18-player 2018-19 roster. As he has shown throughout the program's eight-year history, Head Coach Danny Rodriguez is adept at rebuilding.

"This is the newest team we have ever had," Rodriguez said, noting that he, Assistant Coach Shawn Furman, Team Manager Amber Garner, and Team Assistant Pam Passburg have just four men and four women players to work with so far this fall. "Everybody that's starting right now are learning how to play racquetball. We are encouraged by what we've seen so far."

Lady Flames senior Malia Kramolisch is one of the few returning players in the lineup this season.

"Right now, our team's a little small, so we're trying to recruit a lot of new people and train those people up to get ready for those two upcoming tournaments in the fall," Kramolisch said. "Training up players to play at the national collegiate level is what we're working on over the fall semester and the beginning of the spring semester."

The Flames and Lady Flames will compete in two Mid-Atlantic Collegiate Racquetball Club (MACRC) tournaments at North Carolina State this fall, set for Sept. 27-29 and Oct. 1-3, before playing two more in the spring semester in preparation for the March 25-28 Intercollegiate National Championships in Baton Rouge, La.

Sophomore first-year player Trevor Melton is eager to apply the skills he has picked up in preseason practices.

"Being able to work with the coaches and everyone who's had experience over the past couple years, it's a lot of fun and I'm definitely learning a lot," Melton said. "I'm definitely excited about the tournaments to come, where we'll be trying to get better in our chemistry, playing together in doubles."

Kramolisch can testify from personal experience that the sport is easy to learn, if difficult to master, under the quality of instruction Liberty has to offer.

"The coaches and the advanced players kind of take you under their wing and they play you and teach you a lot of new things," Kramolisch said. "They bring in new players and they teach you everything you need to know. Personally, I didn't know anything and they taught me everything."

"We teach them everything they need to know — the rules, the strategies, the techniques, and everything else," Rodriguez added. "We have had very good success in taking players who knew nothing about racquetball … and they have turned out to be really good players. This is one of the easiest games to learn. It only gets difficult the better you get because your opponents are getting better, so that's when the strategy kicks in."