Goalies back each another up while battling for starting spot 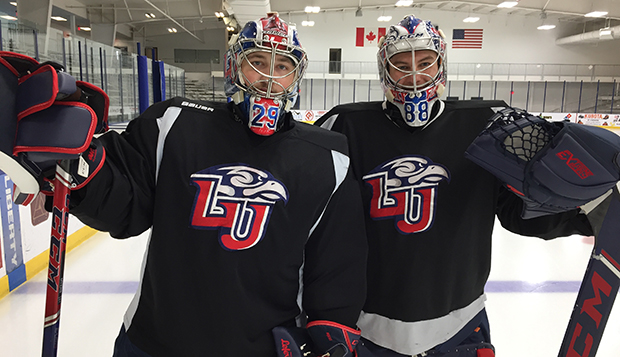 "We're always competing … always trying to push each other, to see who can make the bigger save, see who can do this or do that (better)," said Myers, who challenged Le Sieur to a skate race around the LaHaye Ice Center rink at the end of Monday afternoon's practice. "It was a photo finish."

During intra-squad scrimmages, when the two goalies are both between the pipes on opposite ends of the ice, they have been known to encourage each another with their sticks in hand.

"You make a big save and then you hear a stick tap and you look at the other end and it's Ty tapping his stick (acknowledging) the big save, and I do the same for him," Le Sieur said. "It's fun. We push each other, but we're also there for each other, helping each other get better."

Both have benefited from the coaching insights of ECHL Hall of Fame goalie Dan Berthiaume, who played for five NHL teams early in his career.

"Having a guy who has played in the NHL, Tyler and I were talking about this, it's ridiculous," Le Sieur said. "I don't think there's another school in our league that has that opportunity for their goalies, who caters practices to us to help us get better."

"He always is challenging us, making us think in a different way and opening up our eyes to a different style or way to do something, and it helps us out a ton," Myers added.

Berthiaume has been impressed with the progression of both players, who have the challenging task of replacing Cole Burack and Josh Halpenny, seniors on last season's team.

"They're working really hard, they have great attitudes, they're fun to be around, and I'm really thrilled with the way they're going," he said. "Every week, they seem to get better and better."

Berthiaume plans to platoon the two goalies and doesn't favor one over the other.

"Myers has a little more experience than Cedric, but I watched Cedric play last year and I liked the way he was moving," he said. "I don't think we have seen the plateau of Cedric yet. When you want to work hard and get better, everything's possible."

Le Sieur, Myers, and their teammates are eager to take the ice for next Friday's home and season opener against Duquesne University.

"Everybody in the room is itching to go and ready to hit someone wearing a different sweater," Le Sieur said. "The first game's really going to be eye-opening. From what I've noticed from this team, you can tell it's a very high caliber of hockey and I'm really excited to see what the rest of the league has to offer."

While Le Sieur is the projected opening-night starter and Myers is expected to make his debut for the Sept. 27 "Midnight Mayhem" matchup against Indiana University of Pennsylvania, both will be prepared to answer the call or back the other up on any given night.

"It's a day-to-day thing," Myers said. "We're just trying to be the best goalie we can be for the team, and however it plays out, that's how it plays out. We're both going to play games. It'll definitely be a back-and-forth battle. We've just got to keep working hard and compete, no matter what."

As iron sharpens iron, the two goalies want to make each other, and their entire team, better.

"We have a lot of leaders on the team, so even if you don't have a letter, everybody's stepping up," Myers said. "Everyone holds each other accountable. It's a good dynamic."

"At the end of the day, we all want to win," Le Sieur added. "It's a long season and a lot can happen. As long as we're both working hard, good things will come. If I can help the team win by pushing Ty, and vice-versa, that's what we'll do."

Competing for the starting role of guarding the goal is secondary to their primary objective of sacrificially serving their teammates, which include 12 seniors.

"We have a special group out there, the perfect group to really go all the way," Le Sieur said. "If there's a year to win it, this is our window."

"It's a really big class of seniors and we're trying to help them go out on a really high note," Myers added. "We want to send them out on a championship team."