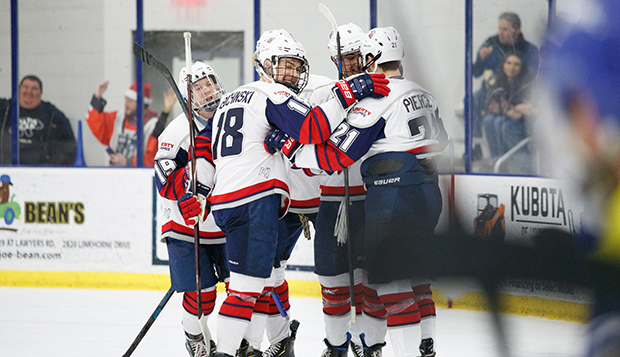 Liberty University's ACHA Division I men's hockey team, which ended the 2018-19 season at No. 8 in the final ACHA DI rankings, will begin the 2019-20 season at that same spot when its opens against Duquesne next Friday at 7 p.m. at the LaHaye Ice Center.

"We are just excited for the season to get going and we believe in our team," said Flames Head Coach Kirk Handy, who is entering his 20th season at the helm.

The Flames, who finished last season at 26-7-4 after defending their Eastern States Collegiate Hockey League (ESCHL) regular-season title and earned their second consecutive auto-bid to nationals, are one of four ESCHL teams in the top 25 preseason rankings, joining No. 12 Stony Brook, No. 18 Syracuse, and No. 22 Rhode Island.

The first ranking of the regular season will be released on Oct. 2, and the first computer ranking — which will help determine the 20 teams that qualify for nationals — debuts on Nov. 6.