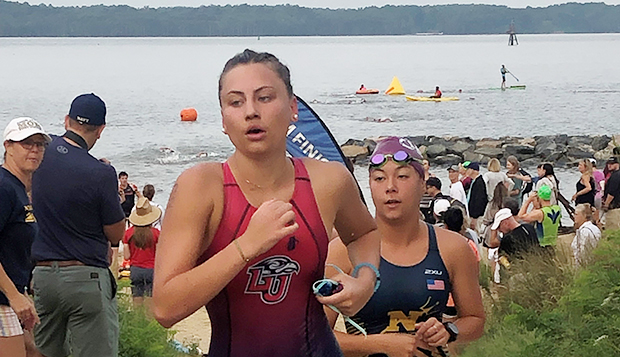 "What a great season opener for the LU triathlon team," second-year Head Coach Heather Gollnick said. "I am excited to see how this team develops over the course of the season, and I can say the energy and camaraderie are fantastic."

Sophomore Max Galbraith, 20, was the Flames' fastest finisher of the day, completing the 750-meter swim, 20-kilometer cycling stage, and 5K run in 1 hour, 1 minute, 51.3 seconds to place runner-up in the age-group race behind only the Naval Academy's Adam Estroff (1:00:37.5).

"Max put in a lot of work over the summer, training consistently, and it shows in his racing," Gollnick said. "He is a great team leader, hard worker, and example to the rest of our athletes. We are very excited to see how his season develops. He has so much potential."

Galbraith posted the fastest cycling time in the age-group race, 30:34, and the fourth-fastest run time, 18:34.

Mark Fairley, a 24-year-old graduate student and first-year member of the Flames, was the overall runner-up in the sprint collegiate race in 1:03:31.1, behind only Navy's Tyler Parsons (1:03:01.4). He posted the fastest run split of the day in 16:32, more than a minute faster than the next fastest run time by the Midshipmen's Jeremy Stevens.

"Mark brings with him an extensive running background, and we have turned him into a triathlete," Gollnick said. "We met last year and worked on his swim with a video swim session at the Liberty Natatorium, and he came back this semester with a much improved stroke. Finishing second in his first triathlon is quite impressive and I am excited to see his continual progress over the season."

Liberty graduate Giovanni Bianco was the overall winner in the Olympic distance race, completing the 1,500-meter swim, 40K bike stage, and 10K run in 1:30:12.7, a full 9:30 ahead of the second-place finisher.

"On the women's side, we have a lot of young talent, many of them coming in with extensive swimming backgrounds and they have so much to gain on the bike and run in the months to come," Gollnick said. "Taylor Vilanni has impressed me the most so far with her improvements over the summer months evident in our first track sessions."

The Flames and Lady Flames will compete at the Sept. 20-21 Giant Acorn Triathlon at Lake Anna in Spotsylvania, Va., before hosting the Oct. 19 Kinetic Cup Triathlon Festival, an Olympic-distance race at Smith Mountain Lake that also serves as the Mid-Atlantic Collegiate Regional Championship.

The Flames and Lady Flames huddle before Saturday's collegiate sprint in the York River in Williamsburg, Va.