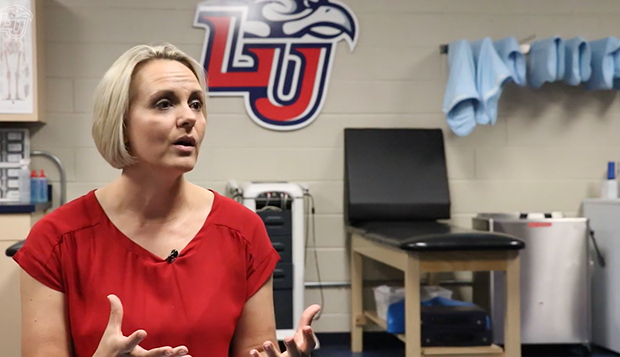 "We only do testing on a portion of athletes because of the sheer numbers we have," Witt said, noting that Club Sports expects 600-650 student-athletes on 41 teams this year. "We will be working with them closely to make sure we are taking the best care of our athletes."

She said in addition to requiring sports physicals for all incoming freshmen and transfers, student-athletes on those 12 teams will have baseline concussion tests performed between tryouts and their first practices. They will not need to be tested again unless they experience a concussion.

In addition to offering nutritional tips and a health screening overseen by Club Sports Coordinator of Strength & Conditioning Chris Kerr, Club Sports Athletic Training staff will emphasize concussion awareness and education at sport-specific meetings for all 41 teams from Aug. 26 through Sept. 19, prior to the start of practices and competition.

Coaches and student-athletes are instructed on how to detect concussion signs and symptoms, such as headaches or trouble sleeping, in themselves and their teammates. The meetings will emphasize the importance of reporting them to a member of the athletic training staff.

"We will definitely be staffing every home event, as well as away events for high-impact sports, including hockey, wrestling, men's lacrosse, and sometimes men's swimming and volleyball," Witt said.

Club Sports Athletic Training is starting two new programs this year: Recovery Mondays, focusing on nutrition and recovery tips; and Rapid Reboot, a quick recovery regimen for legs and hips, from 9 a.m. to noon. Student-athletes can sign up for those classes on the staff's Instagram page @luclubsportsat.