Men's Ultimate set to build on experience, return to regionals 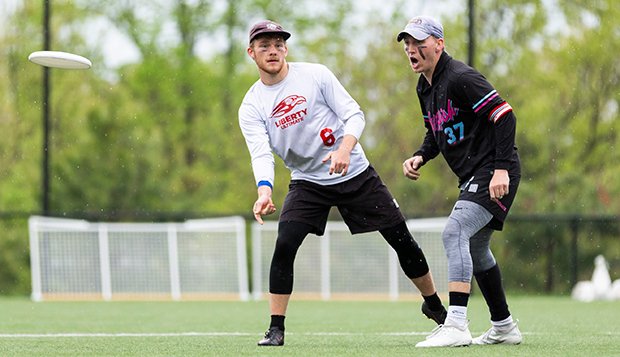 "It can be a challenge to come in and try to figure out where they are at and where they need to be," Habermas said. "Something that Jonathan and I always tried to instill in the women's team was to be faithful in the little things, Just try to do the little things right and the bigger picture will take care of itself."

After implementing new offenses and defenses with help from Assistant Coach Brendan Kinne, Liberty won its first tournament title in late February and carried that momentum into the rest of the spring regular season and postseason.

"It was really exciting," Habermas said. "We had a lot of challenging games and a lot of fun, but I'm really looking forward to a new season where I can really dig in and start from the beginning. Now we have more time to work on bigger-picture stuff."

The Flames will return at least 15 of 16 players from last season and will hold tryouts on Friday from 6-9 p.m. on the soccer practice fields between the tunnel and the Cook Tennis Complex.

"I have a goal to win the (Virginia) Conference this season and hopefully get in the top five at regionals," Habermas said. "With the experience we gained last season, hopefully we won't be as awestruck at regionals and will be able to perform better."