Swimmer has Olympic gold in reach after Pan Am Games win 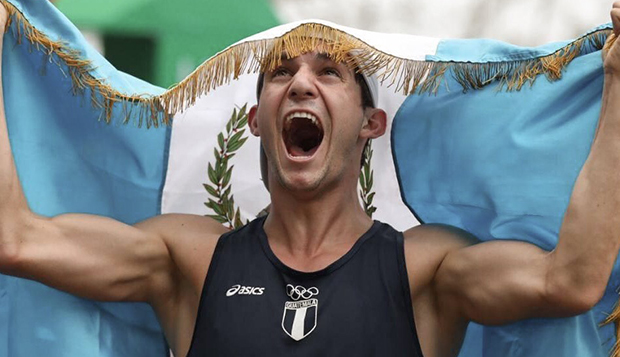 Charles Fernandez defended his gold medal in the modern pentathlon at the Pan Am Games in Lima, Peru. (Photos courtesy of the Guatemalan Olympic Committee)

Liberty University senior men's swimmer Charles Fernandez was the first to strike gold twice at the Pan Am Games this summer when he defended his modern pentathlon title in Lima, Peru, and clinched his second consecutive Summer Olympic bid. He placed 15th at the 2016 Summer Games in Rio, Brazil, and now has realistic dreams of becoming Guatemala's second Olympic medal winner in any event at the 2020 Summer Games in Tokyo — and perhaps take home the country's first-ever Olympic gold.

"The results I achieved in Lima showed 100 percent that, for the first time in my life, an Olympic gold is definitely possible and achievable," Fernandez said.

Guatemala's first-ever Olympic medal in 68 years of competition came at the 2012 Summer Games in London when Erick Barrondo won silver in the 20-kilometer race-walk.

Fernandez was born in Dayton, Ohio, but has dual citizenship in Guatemala, where his family operates My Father's House ministries. (Read more about Fernandez's story in the Liberty Journal).

Before Tokyo, Fernandez will travel to four or five World Cups starting in February and leading up to the July 1 World Cup Championships.

Modern pentathlon includes fencing, swimming, equestrian, and a combined pistol shooting and running event that pushed Fernandez over the top in Peru, where he also posted a personal-best time in the 200-meter swim (2 minutes, 2.40 seconds).

"That was definitely a highlight of the games and even a highlight of my career," Fernandez said. "I've never run or shot like that or been so focused in my life. For me, everything seemed like it was going in slow motion. There is not a doubt in my mind that God was there with me that day and He was the one directing everything. I did my work, but God's the One who finished all of it."

After going all out with five months of intensive training and competition in preparation for Peru, he plans to take the same approach to his training for Tokyo. Regardless of the results, Fernandez plans to retire from the sport after the Summer Games.

"If the Lord wants me to win, I'll win, and if He wants me to lose, I'll lose, but at the end of the day, I'm going to be happy knowing that I gave absolutely everything I had," he said.

For now, the 22-year-old economics major is focused on finishing his degree and competing for the Flames.

"I'm really looking forward to swimming with the team this year," Fernandez said. "We have a very good team with lots of new faces and good talent, and, obviously, that's going to enhance the atmosphere and the quality of the workouts."

Head Coach Heath Grishaw, who accompanied Fernandez to the Pan Am Games and is planning to join him in Tokyo, too, said he is thankful to have him on his team as the fall semester starts. The first event of the season is Sept. 28, when Liberty hosts the University of Lynchburg's first-year NCAA Division III men's and women's teams in an exhibition meet at the Liberty Natatorium.

"Charles will be a key piece to have on the team and a huge benefit for all of us for recruiting purposes and for spiritual leadership," Grishaw said. "He's a hard worker, he's talented, he loves Liberty, and he promotes Liberty every time he goes anywhere."

While Fernandez stays most closely in contact with his Guatemalan coach, former Romanian Olympic pentathlete Marian Gheorghe, and spent 10 weeks in Ireland this summer training with the Irish Olympic pentathlon coach, he has developed a positive rapport with Grishaw.

"I consider Heath a friend, a coach, and a mentor," he said. "He's a very good guy, and the way he carries himself with responsibility and integrity is something I need on my team — people who can add value to the work I have, not just physically, but spiritually."

If anyone can multitask, it's Fernandez, who has shown the discipline to master the five different sports of modern pentathlon while maintaining high grades. As a full-time student taking 18 credit hours this semester, Fernandez will scale back his training regimen — to four or five runs, three or four swims, two weight training sessions, and one fencing workout per week while shooting and riding in his spare time — before ramping it up again in the spring.

My goal is to graduate with high honors, and now is the time to ensure quality in my academics so I can finish well," he said. He plans to walk with his girlfriend, senior nursing student Kristen Bray, at Liberty's Commencement next May.

"It is a balancing act, but what's really cool about Charles is he's great at this sport and great at balancing everything else in his life because he's done it for so many years," Grishaw said.

Fernandez, who had a following of 20 family and friends from Guatemala to cheer him on in Peru, will travel back to his adopted homeland this weekend for a short visit to celebrate his recent success.

"It's honestly a blessing to me to be able to achieve (Pan Am Games gold) but also to give that joy to the people around me who support me," he said, "starting with my country, my family, my friends — all of these people who make the effort of believing in me and praying for me, which is a huge thing."