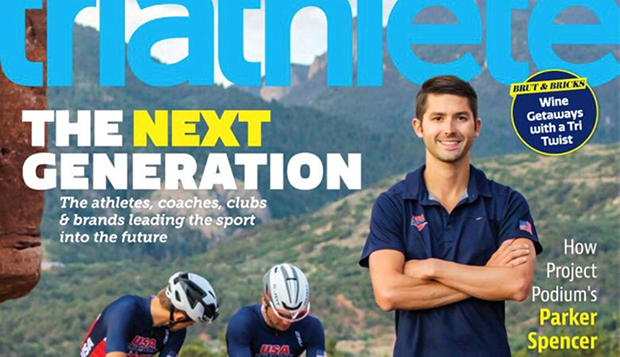 Parker Spencer, who coached at Liberty from 2014-18 after competing in track and triathlon through 2012, is featured on the September/October cover of 'Triathlete' magazine.

Former Liberty University triathlon, cycling, and men's swimming & diving Head Coach Parker Spencer ('12) is featured on the cover of the September/October issue of Triathlete magazine, highlighting a story about "The Next Generation" of athletes and coaches, clubs, and brands that are leading the sport into the future. The cover includes a subtitle that reads "How Project Podium's Parker Spencer is creating a new wave of male Olympic contenders."

In the article, which has yet to hit the newsstands but will soon be available online, Spencer talks about his Liberty career as a track & field runner and triathlete and later coach, juggling Club Sports' three overlapping men's and women's endurance sports.

Spencer left Liberty last summer to begin his role as head of Project Podium, designed by USA Triathlon to develop U.S. male triathletes with Olympic potential. Though he was tasked with training triathletes to qualify for the 2024 Summer Games in Paris and beyond, Spencer already has one team member who is a top-five contender for two Team USA bids to the 2020 Olympics in Tokyo: Tony Smoragiewicz, who is ranked fourth in the United States. Smoragiewicz already has two podium finishes this year — a silver medal at the ITU World Cup in Cape Town, South Africa, and gold at the Magog CAMTRI Sprint Triathlon World Cup in July — and competed in an Olympic Test Event in Tokyo last weekend. His next chance to qualify for the Olympics will be in Yokohama, Japan, in May.

"Having the experience of coaching three different Club Sports teams has prepared me for this," said Spencer, adding he had four different athletes competing on four different continents on multiple weekends this summer.

Next weekend, Spencer will have five triathletes competing in the ITU World Triathlon Grand Final in Lausanne, Switzerland. But Spencer will be staying at home in Arizona with his wife, Kristina, as they expect their first child next week.

In late June, Spencer traveled with a couple of his triathletes who competed in the Pan Am Games in Lima, Peru. A highlight was seeing Liberty senior men's swimmer Charles Fernandez, one of the many international athletes he recruited to Liberty, win his second modern pentathlon gold medal for Guatemala.

Dr. David Horton, a Liberty professor and ultra-marathon pioneer, is proud of what Spencer has accomplished so early in his career of training elite athletes.

"When he was in my exercise science class, he had a passion for exercise and he expressed a huge interest in competing in (triathlons) and developing triathletes," Horton said. "I was so impressed to see him on that cover. But it doesn't surprise me at all, and I don't think anything he achieves in the future will either. He is as great a representative for Liberty as anyone we have ever had."