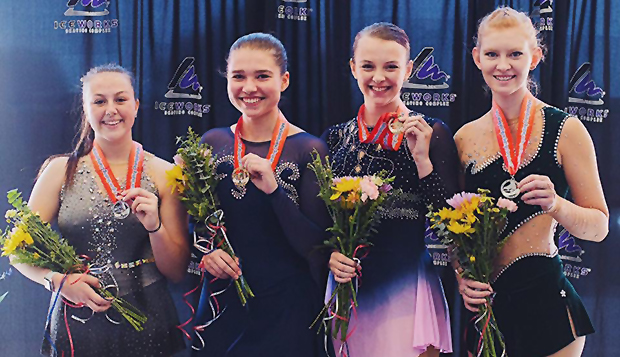 "Angela really pulled through and shined her best, even coming off an injury she has been dealing with," Lady Flames Head Coach Dawn Harter said. "She hit it off well to bring some confidence into the fall season, when she will be coming back full force and skating up at the Junior level in her long program."

Hope Lassiter, a 16-year-old rising sophomore who started in Liberty's online program and will be one of 10 incoming figure skating recruits, also represented the Lady Flames in the Senior division, the highest level at collegiate nationals.

"Hope was in a very tough group of more than 20 skaters and even though she didn't place in the top five, she did very well for her first time skating by herself," Harter said, noting that she previously competed with a partner in intermediate ice dancing. "She is learning what things she can put into a solo program and how to have fun with it."

Harter is happy to have Lassiter on the team as a late residential recruit in early June, when her family relocated from Texas to Lynchburg.

"She brings a lot of high energy and is going to be part of the synchro team as well," Harter said. "She will be the youngest skater to be involved with both programs."

Other returning skaters planning to compete on both teams are rising seniors Chelsea Henry, who will try synchronized skating for the first time; Carley Bryant, Emma Henderson, and Caitlyn Malayev, who were only members of the synchronized skating team last year; returning dual-sport juniors Haley Gram and Emily Wilson; and Alecia Bernau, an incoming freshman from Pennsylvania.

The Lady Flames, who finished ninth in the final Eastern Sectionals standings last season, will have a much better shot of qualifying for nationals with a top-four finish this season now that the Eastern Section will be separated into Northeast and Southeast divisions.

Liberty will be in the Southeast and compete with teams from Delaware, Maryland, New Jersey Pennsylvania, Virginia, West Virginia, North Carolina and South Carolina. Besides Delaware, the only schools that placed ahead of the Lady Flames last season were Carnegie-Mellon (Pa.) and Penn State.

Perennial powers including Boston, UConn, Cornell, Dartmouth, New York University, and Sacred Heart will be in the Northeast division.

"That gives us more of an opportunity to reach the nationals competition at the end of March in Minnesota," Harter said.

There are only two Southeast division competitions set so far, including one hosted by Liberty at the LaHaye Ice Center on Feb. 15, with another on March 7 at Delaware.