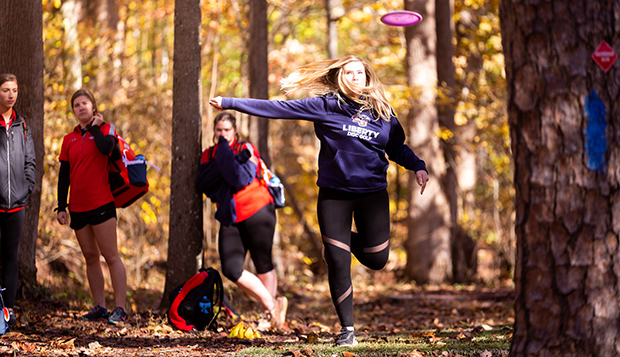 Winning the SouthEastern Collegiate Open (SECO) men's championship last fall on the same course as the NCDG Championships in Appleton, Ga., set the stage for the team's national success.

"It was an amazing year," said Flames Head Coach Steve Bowman, who founded the program and helped design both of Liberty's 20-hole courses on East Campus and near the Hydaway Outdoor Recreation Center on Liberty Mountain. "We were in some bigger environments this last year, so that helped get them ready for the national scene. It was a fluid motion of the guys and gals who have been there for multiple years progressing, getting better, competing well, and putting it all together."

The Lady Flames and Flames are eager to take their respective teams to the next plateau as they continue to rise up the NCDG ranks.

The women's program is continuing to build on its national title, developing a solid foundation of players to contend for future team crowns.

"I have a great bunch of girls that have competed and are excited about coming back and stepping into the role of some of those who have graduated and moved on," Bowman said. "Having our national champions two years ago and the girls finishing second last year and these girls filling in and being in that mode, they really are excited and that's huge for our program."

Bowman has fostered a team culture that invites graduates of the program to return and help train the next flight of championship contenders.

"The guys in the disc golf program who have graduated and moved on into the professional ranks, who understand the game and know how to challenge guys, are coming back and being part of the program," Bowman said. "Having their mentorship, feeding back into the students, multiplies what I'm doing … and is going to grow our program immensely. When you have that dynamic, it builds into who we are and sets a tone for the future of the program."

Among a talented class of incoming freshman recruits for the Flames is Justin Rosak who placed third out of 250 players in his division at the Professional Disc Golf Association (PDGA) Amateur World Championships, July 20-27 in York, Pa.