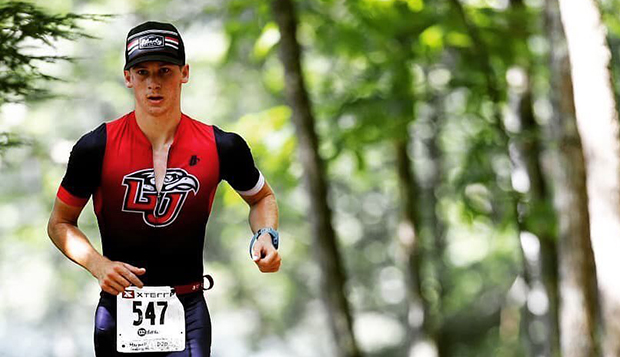 Max Galbraith competes in one of two trail running legs of the July 14 XTerra Duathlon. (Photos courtesy of EX2 Adventures).

Max Galbraith, a rising sophomore on Liberty University's men's triathlon and cycling teams, was the overall winner in the XTerra Duathlon at Rocky Gap State Park in Cumberland, Md., on July 14.

The race featured a three-mile trail run, followed by a 13.5 mountain bike leg, and a five-mile trail run. It included nearly 3,000 feet of elevation gain and loss.

Galbraith trailed the eventual second- and third-place finishers in his 29-and-under age group by 10 seconds after the first running stage (27 minutes, 56 seconds) before his strength on the bike propelled him to more than a 20-minute lead in the cycling stage (1:06:40). He completed the course in 2:12:48, more than 30 minutes faster than the runner-up in his age group and 20 minutes in front of the second-place overall finisher.

"I started doing XTerra triathlons five years ago, and they are definitely something I want to pursue in the future," said Galbraith, who shifted to the duathlon after sustaining a deep wound to his hand while chopping firewood the night before the race. "I'm a competitive person, and I like to see how hard I can push myself. It ended up being a great race and I loved it."

Galbraith, 20, an environmental biology student, has a bright future in endurance sports. He said he's considering a 70.3-mile half Ironman in the next year or two and potentially a Spartan obstacle race.

"To be honest, I like the off-road style racing better than the on-road, so I am going to try to keep doing them," Galbraith said. "I would like to get my pro card someday, but that's not a goal right now. My interest is in doing longer-distance triathlons."

He has been training with former Liberty triathlete Giovanni Bianco ('19) from Italy, who works as a coach at Endorphin Fitness in Galbraith's hometown of Richmond.

Galbraith is also enrolled in Liberty's Army ROTC program and participated in a 37-day leadership program over the summer at Fort Benning, Ga., where cadets from four countries participated in human rights, land navigation, obstacle courses, and eight formations a day.

"That was a lot different than training for a triathlon," Galbraith said. "It was a lot of physical work and activity, but the best part of it that related to endurance training was getting used to the heat, running around with 20 pounds of gear in 90- to 100-degree temperatures."