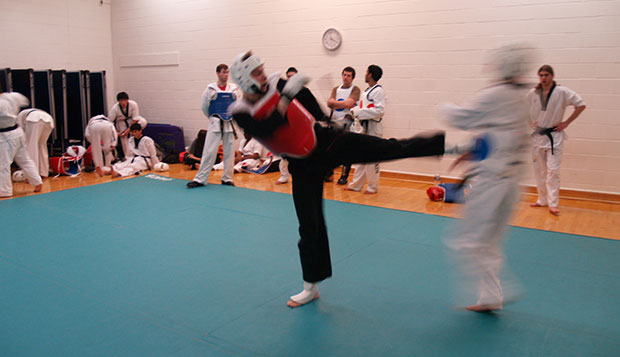 "Since there is no formal league for tae kwon do in the southeastern region of the United States, Liberty University … has formed an alliance … to start the process of formalizing a group of colleges for competition," Wilson said.

He also has been in contact with Duke, N.C. State, and North Carolina, who sound interested in participating in an organized league.

The Flames took nine members of their team to Charlottesville on Saturday for a scrimmage hosted by Virginia, also involving representatives from Virginia Tech, and William & Mary.

"This was also the first organized training session of the newly formed (VCAT) Alliance," Wilson said. "There are several more meets such as this one scheduled in the upcoming months and we are also discussing the possibility of holding the first official VCAT tournament at UVA, perhaps in April or May."((

Saturday's event gave five male and four female members of Liberty's team, including Leah Deaton, who recently was promoted from white to yellow belt, a chance to meet and spar with more than 30 martial artists from other schools.

"As a whole, they did very well," said Wilson, who earned his black belt at the age of 16 and has served as a police officer for the past 15 years. "It was a cross between a scrimmage and a group workout session, (so) no scores were kept. The main thing was nobody was injured, other than a little bruising."

The workout took the Flames out of their comfort zone and challenged them to execute their moves in a simulated competition.

"It was a good experience," Wilson said. "It pushed them to their max to see where they're standing at and see where they need to work."

There were four different belt divisions and each had four weight classes. Each participant sparred at least two full-contact rounds, some against multiple opponents. Since the sport of tae kwon do places an emphasis on kicking, full-contact punches were allowed only to the body.

"We fight Olympic style tae kwon do, with kicks being full contact to the body and black belts being allowed full contact kicks to the head as well," Wilson said.

He said the Flames fared extremely well sparring against their opponents, all from schools that have had club programs for 20 years or more.

This is Liberty's first year offering tae kwon do as a club sports program. The team traveled to one competition last fall in Martinsville, open to colleges and martial arts schools.

"We took nine team members down and we took first place in every division, both men's and women's," Wilson said.