Skiers and riders progress rapidly through Next Level Camps 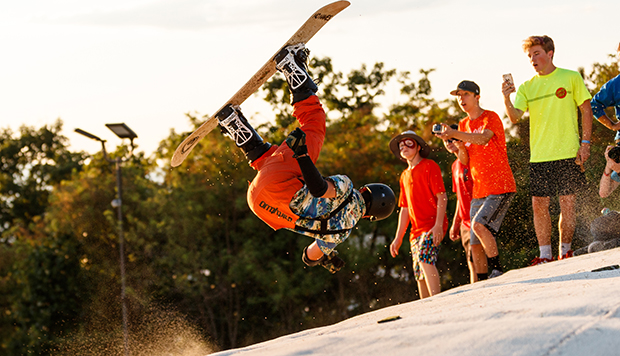 Campers cheer on and photograph a snowboarder in Friday's Big Air competition at the Liberty Mountain Snowflex Centre. (Photo by KJ Jugar)

Gaining confidence while safely testing limits on the slopes are takeaways for the over 100 skiers and snowboarders participating in this month's Next Level Camps at Liberty Mountain Snowflex Centre.

"One huge aspect of skiing and snowboarding is overcoming the component of fear," said Isaac Gibson camp director and head coach of Liberty's men's and women's ski and snowboard teams. "The physical aspect really isn't that incredibly difficult. It's mostly just having the muscle memory and confidence to fully commit to performing a trick."

The Snowflex Centre's aerial awareness trampoline has been a helpful tool in developing that confidence, allowing riders to practice flips and stunts without skis and snowboards.

"It provides a little bit more security in trying some tricks that maybe you're perfectly capable of doing with your skill level and athleticism, but mentally, you're not quite ready to commit to," Gibson said. "And that's everything — being mentally fully committed."

The campers have had plenty of opportunity for progression, ascending the ranks from beginner to intermediate and from intermediate to advanced while shredding the magically misted carpeted slopes for a few hours each morning and evening, following nightly Bible studies.

Gibson said the mission of the camp is to develop campers spiritually and socially as well as physically and psychologically. Many of the skiers and snowboarders end up enrolling at Liberty.

"It's been an incredible tool for recruitment, and it's an awesome opportunity for us as believers to share the Gospel with people who can then go back to their home mountain and take part in Skiers and Snowboarders for Christ (SFC) chapters there," said Gibson, who heads SFC's Lynchburg chapter. "Plus, a lot of our campers, when they get older, end up serving as (Next Level Camp) staff."

"As a first-year, full-on camp director, it's been really helpful to have Ryan around," Gibson said. "He's been an incredible resource, and the camps have run really smoothly. It's been awesome."

"It's a really awesome community built through SFC with this complex network of connections between different areas within the ski and snowboard world," Gibson said.

The back-to-back weeks of overnight camps — also open to skateboarders who utilize the Liberty Mountain Skate Park — pack plenty of thrills and chills in the heat of summer.

The only full-sized, year-round ski and snowboard facility of its kind in North America offers spectacular views of Liberty's sprawling campus below. Campers are also granted access to many of the university's other state-of-the-art athletic facilities as well as its dining hall and dorms.

Throughout the week, campers compete as cabins in a "King of the Flex" scavenger hunt, which takes them to campus landmarks, such as Freedom Tower, and allows them to experience different activities around campus, including swimming, rock climbing, and bowling.

"It's been a really cool way to keep them engaged and to fully experience the university," Gibson said.

At the end of last week's session, the campers participated in a huge dodgeball tournament in the East Campus volleyball facility, and several entered a Big Air competition with nearly $1,000 in prize money at stake. (See list of winners below) 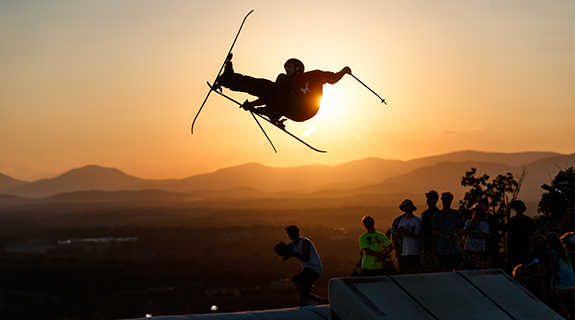 A skier is silhouetted at sunset during Friday night's Big Air competition. (Photo by KJ Jugar)