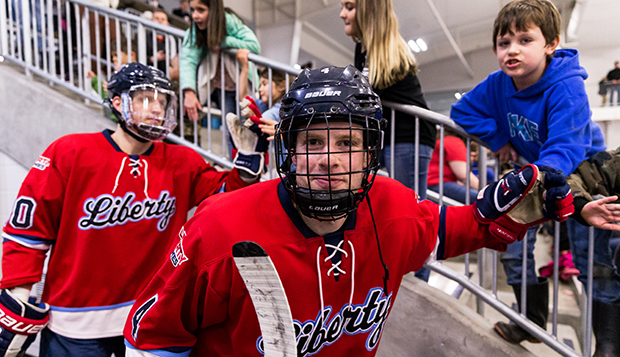 Matt Cruickshank interacts with Flames fans around the tunnel before a game last season. (Photo by Gabrielle Calhoun)

Cruickshank fills a void on the DII men's hockey staff left by Danny Logan, who was in charge of the offense the past two seasons. Second-year Assistant Coach Christian Garland will now shift from directing the defense to running the offense with Cruickshank taking Garland's responsibilities.

"Matt played at a high level of hockey coming into Liberty, with a lot good organizations and players who have gone on to the professional ranks," Hughes said. "His experience and his personal development through hockey, on and off the ice, will be really valuable to our team."

Hughes said Cruickshank, who received the Club Sports Community Service Award last spring for his travels to Rwanda through LU Send's G5 Initiative, his hospitality toward visiting teams, and work with Lynchburg-based Sports Outreach International and Liberty Christian Academy's baseball team, will be a spiritual mentor to the DII team members.

"That's a huge asset that Matt has, (his) desire to not only grow himself spiritually, but to help walk through life with some of these guys," Hughes said. "He brings that perspective where it's not just about hockey, but about growing the person as an individual and growing their heart and growing their mind to look more like Christ. He's not too far removed from their shoes, and he's able to help them relate and go through life together."

He will also serve as a graduate assistant in the Club Sports department and assist Hughes and Director of Recruiting and Special Events Kaycee Tripp, as a special events coordinator.