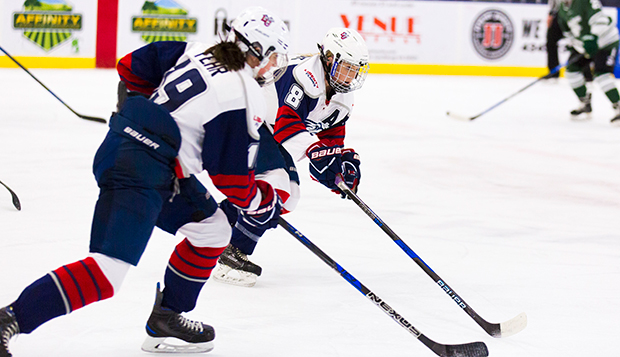 Liberty University's two-time defending ACHA Division I national champion women's hockey team has designated its captains for the 2019-20 season, when it will look to become the first program since Lindenwood (2008-10) to win three consecutive crowns.

Lady Flames junior forward Shannon Fehr will take on the responsibilities of head captain. Senior forward Vanessa DeMerchant and senior defenseman Dana McLeod will return as assistant captains and be joined by junior forward Aly Morris. DeMerchant and McLeod both represented Liberty and Team USA in the Winter World University Games in Russia this past March.

"I really like this group, and they balance each other out with their strengths," Liberty Head Coach Chris Lowes said. "We had talks with all four of them before they left for the summer and discussed what our vision was for this coming season. I believe they'll have the ability to work well together and really just set the tone. It's going to be a good relationship between them and with the coaching staff, and I have a lot of confidence in what this group will be able to do."

He said Fehr, who has traveled with her family on various international mission trips, led a Bible study for this past school year, developing a strong rapport with the Lady Flames' veterans and newcomers.

"Shannon took a big leadership role spiritually this past year and gained the trust of her teammates as well," Lowes said. "She gives us stability for the next couple years and that's exciting. Since her freshman year, she has shown that she has natural leadership ability. We considered having her serve as a captain as a sophomore, but decided to give her another year to mature. People feel really comfortable with her and have faith that she will do a great job."

As returning captains, DeMerchant and McLeod will continue to serve as leaders on the ice, in the classroom, and around campus, according to Lowes.

"Captains have an important role, but we have great leaders throughout the lineup who will support the captains as we take the next step and figure out what our team culture is," he said.

Morris, meanwhile, will continue to be a key factor in the Lady Flames' success.

"She has been reliable in all situations as a hockey player on the ice, has great hockey IQ and is very coachable," Lowes said. "Off the ice, we have seen her develop into a quiet leader that her teammates respect."

He said the team's goal is to develop its student-athletes in all areas — academically, spiritually, athletically, physically, and socially.

"We have had discussions and are looking for more ways and opportunities for service within our team, around campus, and in the community," Lowes said. "We want to continue to increase that impact that our team has off the ice. We have helped with the area youth hockey league, but there are lots more things we can do locally to make sure our players are leaders within our own campus."

Players will return to campus by Aug. 18, the day before classes start. Liberty will open its season with an exhibition against the Hamilton (Ontario) Hawks on Aug. 31 at 1:30 p.m. in the LaHaye Ice Center.