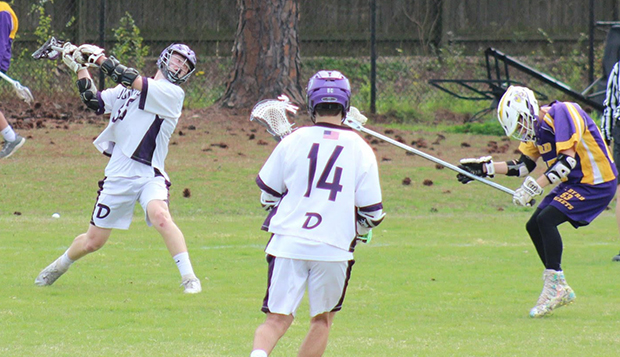 Nathaniel Spears (left) fires a shot from the perimeter for Dutchtown High, the public school team he plays for.

He first picked up a stick at the age of 5 while living in a suburb of Richmond, Va., where he played on his first travel team before joining another when his family moved to Toledo, Ohio. He played there until they relocated to Louisiana when he was in middle school and is looking forward to returning to his roots this fall.

Spears was homeschooled for half of the day and attended Sequitur Classical Academy, a private school in Baton Rouge, La, where he was class valedictorian. Meanwhile, he played basketball and lacrosse for Dutchtown High School in nearby Prairieville, La., where his lacrosse coach, Shane Koppens, also led Louisiana State University's men's team to its first MCLA Division I National Tournament this spring.

"Nate has had good coaching and I expect him to be able to come in and make an impact pretty quickly," Flames Head Coach Kyle McQuillan said. "He's got the size, speed, and skills to make a difference from Day 1 and all the potential in the world to be a fantastic player for us for the next four years."

Spears, who is 6-feet, 2-inches tall and weighs 190 pounds, shifted back to midfield for his senior season, and enjoyed his most productive season, setting a school record with 52 goals while adding 29 assists to account for 57 percent of his team's offense. He also picked up 77 ground balls and forced 22 turnovers. For his three-year career at Dutchtown, he scored 128 goals and distributed 63 assists.

"I am not extremely elusive, but more of a powerful dodger and shooter," Spears said, noting that he had to generate most of his own shots and used his physical size to his advantage. "I would usually run though defenders rather than deke them out."

This summer, Spears will compete in tournaments on the East Coast with his travel team coached by Koppins, facing several teams featuring NCAA Division I and DII prospects. He entertained offers to play at North Greenville (N.C.) and Palm Beach Atlantic (Fla.), but opted for Liberty after visiting for a College For A Weekend (CFAW) in the fall semester. He was sold on its world-class Christian education and variety of student activities on campus.

"More traditional lacrosse schools are smaller in nature," McQuillan said. "What is unique about Liberty, especially for a Christian school, is its size. There's plenty to do outside of just lacrosse. Being able to go to football games and get a true college experience, Liberty offers all that to potential recruits."

Spears plans to study biomedical sciences and go on to medical school to become a doctor. (His father received an M.B.A. from Liberty.) He will be in Liberty's honors program and take special seminars in his field of biology and chemistry.

"I am embracing the challenge," Spears said "Throughout high school, I liked to be on as many teams as I could and even worked a job while staying at the top of my class academically."

"Lacrosse players have to sacrifice a lot of their free time and for pre-med students and other majors, it's a lot to have on your plate," McQuillan added. "It's definitely going to be tough, but we make sure academics is a priority and provide the guys the resources so they can be successful in both."