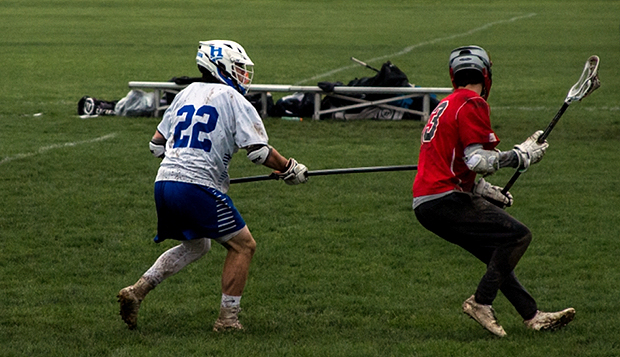 Levi Lowmaster will follow the path of his brother, Nathan, and join Liberty University's men's lacrosse team as a freshman defender this fall.

Nathan Lowmaster, who is 11 years older, played closed defender and long-stick midfielder for the Flames from 2010-13, in their first four seasons after Head Coach Kyle McQuillan helped revive the program.

He went on to become a police officer and realtor in his home state of New York and joined fellow Flames alumnus Miguel Lozada ('14) in forming Puerto Rico Lacrosse in 2016. Levi also wants to become a state trooper after earning his business degree.

Levi Lowmaster's lacrosse game compares favorably to that of his older brother.

"We are definitely pretty similar as defenders, though I'm faster and quicker and he's bigger," said Lowmaster, who stands 5-feet, 11-inches tall and weighs 180 pounds.

Liberty has changed considerably in the six years since Nathan Lowmaster graduated, as Levi witnessed firsthand during his College For A Weekend (CFAW) visit in April when he watched the Flames rout Minnesota in their annual Midnight Mayhem matchup.

"I loved the team aspect and camaraderie and the facilities were insane," Lowmaster said. "I am pumped; I can't wait. I am going to be running and lifting and eating right and having a stick in my hand all summer, just really working hard and making sure I'm a team player."

He is a leader adept at teambuilding wherever he plays.

"I'm super outgoing, have a lot of really close friends on the teams I've played on, and will bring a good camaraderie," Lowmaster said. "I work hard, love the weight room, and am looking forward to being a part of the team, which will be a super outlet for spiritual growth."

Assistant Coach Mike Zumpano, who works primarily with the Flames' defenders, played on the same line with Nathan Lowmaster at Liberty and is excited to have his younger brother join the defensive corps.

"When Nathan and I were players, Levi was just a kid, 9 or 10 years old, and he'd come to the games with his family, so it was an easy connection for him to make," said Zumpano, who graduated three starting defenders off this spring's squad, including MCLA third-team All-American Win McKeever. "I'm glad he considered us and expect him to be a part of the mix and fight for a starting position this fall."

Lowmaster led Horsehead High School in forced turnovers and ranked third on the team in ground-ball pickups this spring. He was selected to play in New York's Section IV Exceptional Senior Game on June 10. He also played basketball for his high school team and has participated in FCA Lacrosse camps in previous summers.

"Levi is the type of player who can be a centerpiece for our defense for the next four years," Zumpano said. "He comes from a rich playing tradition up in New York, where he has experience playing a high level of lacrosse. He has good size and mobility along with a high lacrosse IQ and strong decision-making skills. His athleticism and experience will be a good complement to the group we have coming back and will be beneficial to him in making a smooth transition to the college game."