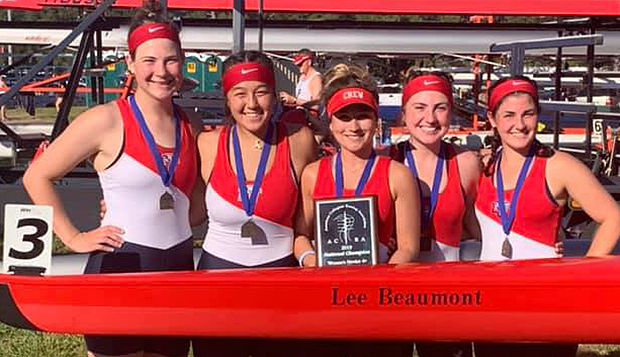 The women's Novice 4 crew won its fourth gold medal of the season and first for any Liberty team at nationals in recent years.

Liberty University's Women's Novice 4 crew pulled away from the rest of the field in Sunday morning's A final to claim a national title by nearly four seconds at the American Collegiate Rowing Association (ACRA) championships on Lake Lanier, site of the 1996 Summer Olympic Games' rowing events in Gainesville, Ga.

The Lady Flames' boat — rowed by freshman Lindsey Bicknell, sophomores Joanna Moran and Meredith Thompson, and junior Tori Drumheller with senior Kaylee Ruiz as the coxswain — completed the 2,000-meter course in 8:1.387 for their fourth first-place A final finish of the season.

"Since I've been here, this is the first gold medal that we have won at nationals," Liberty fourth-year Head Coach Debbie Prowse said. "It's a great accomplishment racing club teams from all over the country. We definitely peaked at the right time."

"We expected it to be a much tighter race at the finish, but the girls gave it everything they had and wanted to see how much they could win by," Prowse said. "It was awesome. We were a little bit down in the second 500 meters and started making our move at around 1,000 meters and made it a decisive victory in the last 25 strokes. We had a bit of open water. It was amazing."

Liberty advanced directly to Sunday's A final on Friday by winning the third of three heats in 8:21.633, the second-fastest time out of 20 boats.

Meanwhile, the Flames' Men's Double of rising seniors Ryan Krupansky and Brad Weisman finished second in its B final in 7:54.326, just over a second behind a pair of scullers from Michigan and three seconds in front of a tandem from Notre Dame.

Liberty advanced to the B final by placing seventh in Saturday's first semifinal in 8:19.453. The Flames had made it into the semifinals by finishing third on Friday in the first of four heats of eight boats in 8:11.0.

"They had a tough field of 30 boats to compete against in their race and did really amazing to get into their semifinals," Prowse said. "They worked really hard, and both (men's and women's) teams have pushed each other this season, which made both of the boats faster at nationals."

Prowse is happy with the direction of Liberty's crew program, based out of a boathouse near Mitchell's Marina at Smith Mountain Lake.

"I am excited to build the team and keep the momentum going," she said. "The culture of the team is becoming very positive, with the rowers dedicated to supporting each other, and we are looking forward to bringing in some new novices and recruits next year."