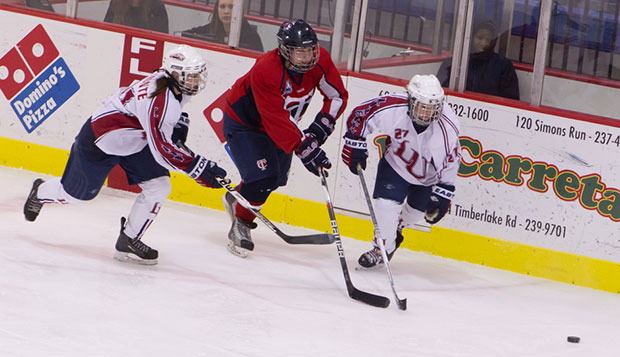 In a rematch against Tri-City Selects, a women's league team based out of Raleigh, N.C., Liberty University's Division I women's hockey team posted two decisive shutout wins Saturday and Sunday afternoon at the LaHaye Ice Center.

Forward Sarah Stevenson returned from a concussion suffered three weeks ago at Robert Morris in Chicago to score two goals in Saturday's 3-0 triumph, when the Lady Flames outshot the Selects by a whopping 65-4 margin. Then on Sunday, Chantal Lischynski made her second start in goal since recovering from knee surgery and recorded her second shutout in a 7-0 rout of Raleigh.

"We found the net a few more times today," Liberty head coach Paul Bloomfield said, noting the Lady Flames outshot their guests by a 51-7 count Sunday. "We only beat them by a goal each time in the fall (3-2 on Oct. 6 and 2-1 on Oct. 7). We worked on getting more goals, putting more pressure on the goalie today, so it paid off."

Stevenson, who returned to practice last Wednesday and was cleared to play Friday night, netted both of her goals off first-period power plays, the first on a 5-on-3 advantage.

"We work on our power play a lot and it's nice to know that at the end of the year, it's really coming together and it's nice to know we can get a goal off those," said Stevenson, who was assisted by Stacey McCombe on the first goal and Amanda Grainger on the second. "The first goal, there was a lot of cycling, passing around. We were cycling, talking, always knowing where each other was. The second goal, I was coming off a line change and I just called for the puck from Amanda from behind the net. She just put it right up into the crease and I just shelfed it, with a wrist shot from the top of the circle."

"Our power play was working good today," Bloomfield added. "We didn't get as many as I would have liked, but we out-shot them. We really need to work on getting them in the back of the net."

Stevenson was happy to contribute right from the get-go.

"It was my first game back, so it's been a while," Stevenson said. "It was really good, I missed it a lot. It felt good to do something, not just like make my way back, but to make a statement, kind of."

She had excellent chemistry with line-mates McCombe, who scored Liberty's last goal late in the third period, and freshman Carrie Jickling.

"We're actually all centermen, but we all work together in one line," Stevenson said. "We definitely dominate out there."

The Lady Flames used the weekend series to fine-tune some aspects of their game, but didn't overlook the Selects, whose only losses other than the four against Liberty came against two men's teams.

"Some of the girls on the team have played college hockey and just retired and some of them are high school kids," Bloomfield said. "They're pretty competitive. They've got some girls that have got some talent."

"I think our team really came out to play, didn't take them lightly even though it's not like a league team," Stevenson said. "That's what brought us over the top, even though we didn't have a big scoring game, we worked on really good things as a team."

On Sunday, Lischynski, who missed all of last semester but has started twice since Christmas, stopped all seven shots by the Selects.

"She looked very good," Bloomfield said. "She didn't get a lot of shots on her, but there were a couple she had to stand on her head to get, to work for."

Lischynski was the Lady Flames' No. 1 goalie last year, with Rupp serving as her backup all the way through the national tournament before Lischynski tore the ACL in her knee a week later.

"We're just slowly getting her back in the grind again," Bloomfield said. "You never know for sure until you get in to the heat of the battle, but I'm just trying to ease her in to get her ready for nationals."

Grainger, who played on the same line as McCombe and Stevenson last season, ignited Liberty's attack with two goals and two assists on Sunday.

"She plays well with everybody," Bloomfield said of Grainger, who stands 5-feet tall, but plays much bigger. "We put her on whatever line we need assistance with. She's tough around the net. She's small and mighty."

Grainger spent some time in the penalty box in the second period after battling around the cage.

"She got a little too aggressive, on a rough play around the goal," Bloomfield said. "She got an interference penalty because she was being aggressive around the net. She was in the goalie's face."

Grainger scored the game's first goal unassisted less than three minutes after the opening faceoff before she and fellow sophomore forward Jenny MacArthur assisted Laura Del Monte at the 11:08 mark. Courtney Fischer netted the game's only power play goal with 8:45 left in the first, set up by Jickling and Stevenson, before Grainger scored again, off an assist from Fischer, with just under five minutes to play in the period.

Liberty added two goals in the second period, with Sarah Fowler scoring off assists from McCombe and Jickling seven minutes in before Jickling finished off a feed from Autumn Kucharczyk two and a half minutes later. Finally, with 2:12 remaining in the game, Madi Fischer netted the seventh goal on a nice shot from the point off Grainger's second assist.

Next weekend, the Lady Flames (21-2) will travel to Pittsburgh, Pa., to play two games against Chatham, a women's college with an NCAA program, starting Saturday at 7 p.m. and Sunday at 1 p.m.

"Those games are for bragging rights," Bloomfield said. "Wins next weekend will count as wins (in Liberty's record) but the points won't count" toward the ACHA DI rankings.

The Lady Flames have been ranked No. 1 in the nation in the past two ACHA DI polls, with the last to be released on Feb. 22 or 23.

"We have two games (next weekend) and then we have two and a half weeks off until nationals," Stevenson said Saturday. "Everyone's going to take care of themself and show up to nationals as a full team, because we didn't last year. I think we're just going to get even better and build as a team and the sky's the limit for us, really."