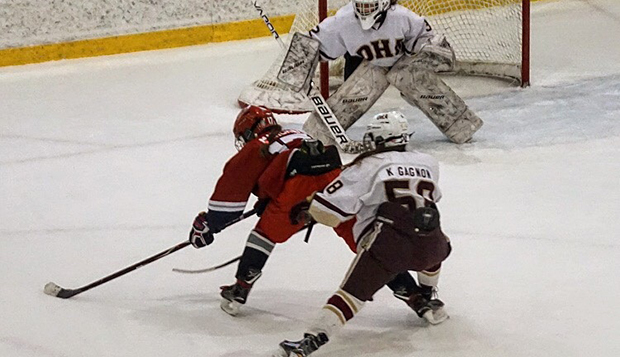 Valeriia Manchak skates on goal during a game with her Hockey Training Institute (HTI) Elite Stars team in Ontario, Canada.

Incoming Liberty University ACHA Division I women's hockey forward Valeriia Manchak fell in love with the program and school at first sight after flying down from Ontario in late February.

Manchak finalized her commitment to the team this month and will be the Lady Flames' third incoming forward recruit, complementing two defensemen and one goalie to bring next season's roster to 23 players (13 forwards, eight defensemen, and two goalies).

"Both talent-wise and in numbers, I think we will be stronger this year than were last year," said Liberty Head Coach Chris Lowes, who guided the Lady Flames to an ACHA Division I title defense, their third crown in five seasons. "I really like our recruiting class. We have added some two-way talent up front and Val just gives us another weapon."

The Lady Flames will look to become the first ACHA Division I team since Lindenwood (2008-10) to win a third championship in a row next March near Dallas.

"Success raises the expectation level and we start from scratch in the fall, when we will have an awesome opportunity to do something special," he said.

Manchak is eager to join Liberty in that quest.

"The most exciting thing is that I will have an opportunity to compete on the highest level with a great team of champions and work with talented coaches," she said.

Originally from Kharkiv, Ukraine, Manchak played forward for two seasons there while studying at the Ukrainian Law Academy. She completed her degree online the past two years while playing forward and defenseman on the Hockey Training Institute's (HTI) Elite Stars squad in Ontario, where she scored 18 goals and distributed 12 assists in 52 games.

As a 21-year-old graduate student, she brings both experience and maturity to an already veteran squad and Lowes expects her to fit right in with the Lady Flames.

"It should be a pretty easy transition for her to do school and continue her hockey career here," he said.

Manchak speaks Ukraine, Russian, and English fluently. She will begin her M.A. in Public Policy at Liberty this fall.

Manchak considers herself a hard-working, dedicated player and student.

"I am a skilled, fast, and aggressive hockey player," she said. "I think I can bring something new to the game style, to change it in a better way."

"We weren't going to bring anyone else onto our roster unless we thought she would add something to our team," Lowes added. "She is a super high-energy forward and a very athletically gifted and skilled player and will be a great addition. … She will be a dangerous offensive threat for us."