Pryor will train with Reynolds to fill vacancy in Flames' goal 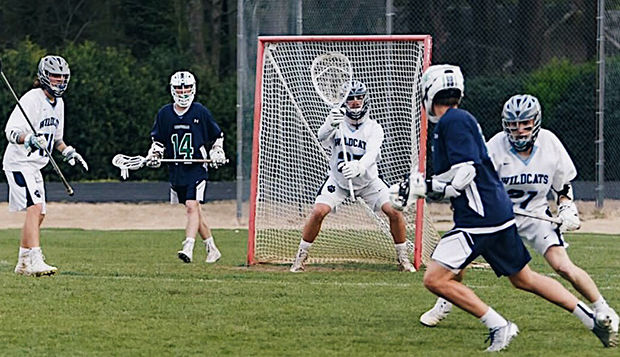 John Pryor stopped more than 60 percent of the shots he faced as the starting goalie at Millbrook High School in Raleigh, N.C.

Incoming Liberty University men's lacrosse goalie recruit John Pryor earned first-team all-conference honors as a senior at Millbrook High School in Raleigh, N.C., this spring, where he saved 60 percent of the shots he faced. Previously, he made a positive impression on the Flames' coaching staff while participating in Liberty Lacrosse Camps over the past two summers as well as this past fall's recruiting showcase.

"I worked really, really hard during the camp, which is how I got my name out there, and this past summer (Coach Kyle McQuillan) told me they were interested in me," said Pryor, who also had an offer to play at Montreat College, an NAIA program coached by former Flames goalie Ethan Kamholtz.

Liberty's world-class Christian education and spiritual focus were key factors in his decision.

"I like the Christian aspect of the team and being in an environment that shares the same core values," he said "At the lacrosse summer camp, I liked how everyone was kind of like brothers, with a strong bond between the coaches and the players."

"Time management was important for me as a high school athlete, and moving into college, I will definitely need to maintain that academic rigor," he said. "I can't wait."

At 6 feet, 2 inches, 183 pounds, Pryor has good size and mobility for a goalie, and is solidly built to withstand body checks.

"He is a big, athletic kid who is fundamentally sound with his goaltending skills," McQuillan said. "He has good quality character, a great attitude, and some of the things you can't teach — size, athleticism, and a great work ethic."

Pryor describes his playing style as conservative, though he has learned when to take calculated risks to come out of the cage.

"Toward the end of the season, I started getting aggressive and really using my body, being agile in the crease to block those shots," Pryor said. "I like starting fast breaks and definitely am smart with the ball."

Above all else, what McQuillan saw in Pryor was his potential.

"He will have the opportunity to come in and get much better and excel as a lacrosse player," McQuillan said. "Our intent is to develop these guys and help them improve with their fundamental skillsets, strength and conditioning, and lacrosse IQ. I am confident his game will continue to grow and we expect big things to come from John."

"(Members of the coaching staff) all have the ability to push incoming players to the next level," McQuillan said. "With Brayden (Harriman) graduating and Ryan our only other goalie returning, we are starting to establish who that goalie for the future is going to be, and John has a good chance in helping us to fill that role. It's a great advantage for him to come in early and learn our systems and watch a guy like Ryan, who has done it well for years, and learn from his example."