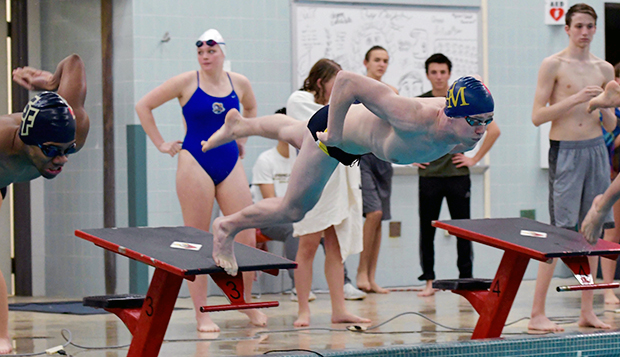 Aidan McNally leaps from the starting block at the start of a race for his Upper Merion Aquatic Club team. (Submitted photos)

Second year Liberty University men's swimming & diving team Head Coach Heath Grishaw has finalized his first recruiting class, made up of 15 swimmers who will more than double the current roster.

"My goal is to build this team and I am confident we have the ability and the tools, especially with this incoming class, to make a push for a top-10 finish at (the Collegiate Club Swimming) National Championships," Grishaw said. "We are covering events we never have before, including the 400 IM and 200 breaststroke, which is exciting. This is a great starting point. Each and every one of them is passionate about it and are going to do great things for this program."

Besides Matt Davidson, a 50-yard freestyle VHSL Class 4A state champion from nearby Forest, Va., who committed to join the Flames in November, two of the swimmers with the most impressive records are Pennsylvania recruits Aidan McNally and Robert Boehme.

McNally, who holds five school and three pool records at the Upper Merion Aquatic Club, is strongest in the 50- and 100-yard free and is looking to swim in the breast and butterfly events as well. Boehme is best in the 500 and 1,000 free, but may expand his horizons to swim in the 200 breast and 400 IM.

"My goal with all of the swimmers coming in is to strengthen them and mold them and potentially see them bloom in other events," Grishaw said. "Their bodies are still shaping, forming, and they'll be doing a lot of different things they're not used to in the water, with a lot more power, racing, and strength training."

He will put all of his swimmers on rigorous strength training programs, overseen by the swimming & diving team's new strength and conditioning coach Ross Garner.

The Flames' 12 other incoming recruits are Christian Dilena, who swims the 100 and 200 breast and 200 IM for the Crawfish Aquatic Club in Lafayette, La.; Zach Mallory who competes in the 50, 100, and 200 free for Team Greenville (S.C.); Carter Helsby, a sprint and distance freestyler, 100 and 200 IM and breaststroker from Montana, who also swam for the Mwanza Swim Club in Tanzania, where his parents are missionaries; Josh Askren, a 200 IM and 50, 100, and 200 backstroker from Mount Sophia Academy in Wilmington, Del.; Robert Monroe, a sophomore 100 fly, 200 IM, and 200 breaststroker from California; Tyler Wunderlich, from Franklin County, Va., who received his B.S. in Exercise Science and will compete in the 100 breast, 100 fly, and 200 IM as he pursues his Master of Public Health; Derrick Nault, who swam the 50 and 100 free and 100 fly for Lincoln (R.I.) High School; Jack Ramberg, a sophomore who previously swam the 50 and 100 free and 100 fly for Loudoun County (Va.) High School; Wade Lawrence, who swims the 200 and 500 free and 50, 100, and 200 back for Lifetime Minnesota Club in Princeton, Minn.; Isaac Hanna, a freestyler, 200 and 400 IM, and 100 and 200 breaststroker for the Infinity Aquatic Club in Pfafftown, N.C.; William Irvine, a 50 and 100 free and 50 and 100 backstroker for Landstowne High School and the Tide Aquatic Club in Virginia Beach; and Peter Bagans, a freestyler, 100 IM, and 50, 100, and 200 breaststroker for the Liquid Lightning in Lake Orion, Mich.

The Flames will host their first exhibition competition of the 2019-20 school year at the Liberty Natatorium in September, a tri meet with the Lady Flames' NCAA Division I women's team and the University of Lynchburg's new NCAA Division III men's and women's team.