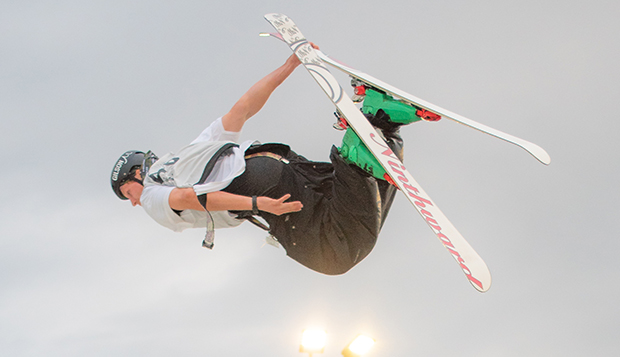 Several members of Liberty University's men's and women's ski & snowboard teams competed in a Big Air competition on April 27 at the Liberty Mountain Snowflex Centre (LMSC) as part of the Campus Rec Fest.

"It was a really fun, relaxed atmosphere and an enjoyable event," said Flames Head Coach Isaac Gibson, who served as the event's emcee. "There was a pretty good balance of outside contestants and team members."

The Jam-style format allowed participants to perform as many drops as they were able to in an hour's time, with most getting in around 10 runs. Contestants were scored on their overall impression.

Rising senior Milo Rice, who placed second individually in the men's Rail Jam and led the Flames to third-place Rail Jam and Slopestyle team finishes at the USCSA National Championships in mid-March at Jackson Hole, Wyo., won the snowboard Big Air competition. He edged out ODU's Ryan Bozeman from Virginia Beach and Matthew Hylton from Christiansburg.

"There were some pretty big tricks being done in men's snowboard, including a backside 900 from Ryan Bozeman," Gibson said. "That was probably the best trick, but Milo had the best overall impression, putting down 720s, 540s, 360s, 180s, and back flips."

Isaac Shepard, who recently graduated from the School of Engineering, won the skiing Big Air event decisively, according to Gibson.

"It wasn't a surprise because Isaac's very, very consistent on Snowflex and absolutely loves that jump," Gibson said. "He did quite a few switch tricks, coming in backwards, including 720 and 900 spins, switch variations, and corking spins."

JMU's Blake Davis from Richmond, a previous participant at LMSC's Next Level summer camps who will work at this year's day camp in June and overnight camps in July, came in third.

Graduating senior Kylie Kehrman was the only women's skier in the competition and she successfully landed a trick she had never done before, a 180 over the three-foot jump, on her first try in the contest.

First, second, and third-place finishers in both events walked away with $200, $100, and $50 in prize money with former Flames snowboarder and Snowflex Marketing Coordinator Kevin Hoff giving out LMSC-branded hats as awards to contestants attempting the biggest tricks and sustaining the heaviest falls.

A few participants of Liberty's spring Next Level Development Program also competed in an exhibition.

"It was a great opportunity for riders to showcase their skills in front of their families who came up to watch the contest, to see the level our riding athletes are performing at after just a few years and to see what the potential is if their kids stick with it," Gibson said.

Snowflex will host its next Family Fun Night on June 14 with skiing and snowboarding and tubing as well as food trucks and inflatables open to the public from 3-10 p.m. Admission is $5 (free for kids ages 3 and younger) for visitors to enjoy all of the facility's amenities, including the advanced and beginner slopes and tubing park.