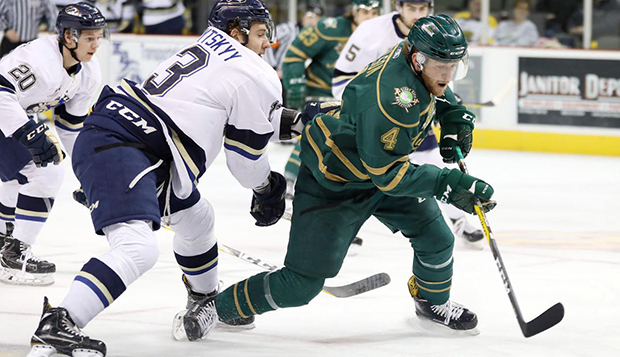 Vitaliy Novytskyy, who traveled to the United States with fellow Ukrainian defenseman Dmytros Kobylyanskyi, will also transfer to Liberty University's ACHA Division I men's hockey team this fall, as a junior out of NCAA Division I American International College in Springfield, Mass.

Before beginning their collegiate careers at American and Wisconsin-Stout, respectively, Novytskyy played one season with Kobylyanskyi on the Sioux Falls (S.D.) Stampede. They also played together on the Philadelphia Little Flyers and U16 and U18 teams in Delaware and New Jersey.

Novytskyy played 15 games as a freshman but only 10 as a sophomore at American, which upset top-seeded St. Cloud State in its first-ever NCAA Division I National Championships appearance in Fargo, N.D. in March.

"I wasn't getting as much ice time as I wanted to in my second season at American," he said. "But sometimes it goes the way it goes and I found a huge opportunity here and I'm looking forward to that."

He plans to continue studying criminal justice at Liberty, as he did at American International, and has looked into pursuing a pre-law degree through the Helms School of Government.

Novytskyy's parents moved from Ukraine to Poland in recent years, but his new life is in the United States.

"It's been a completely different experience and culture here, a land of opportunities, basically," he said. "I came here to find that opportunity and it's been an awesome experience."

He visited Liberty in April and was impressed with everything about the program and university.

"It's a great campus here and a great atmosphere," Novytskyy said. "The facilities are incredible. It'll be awesome to have an ice rink on campus and to have access to it 24/7. On top of that, I'll be playing for a fantastic coaching staff with terrific teammates and in front of amazing fans. Everyone's very receptive and I am excited about just being closer to God and around other Christians. Everyone's happy. Everyone's always energetic. Everyone's always smiling. You want to be around those type of people, who elevate you and don't bring you down. That's probably the biggest part of what brought me here."

Novytskyy has been leaning on God in dealing with recent health and personal issues.

"I have been letting Him guide me through those times and it made sense for me to come here and grow closer and closer to Him," he said. "I'm just focusing on practicing and training hard over the summer, skating and getting better as a player and as an individual."

Novytskyy brings the ability to skate with or without the puck and considers himself an offensive- and defensive-minded defenseman.

"I can play both ends," he said. "I am very good defensively, and offensively I've got a good shot. I can walk in across the blue line and get the shots through."

He said he and Kobylyanskyi bring similar styles to the defensive corps.

"I think he has a better shot, maybe I have a better skating ability," Novytskyy said. "It will be evident we have a very good connection on the ice."