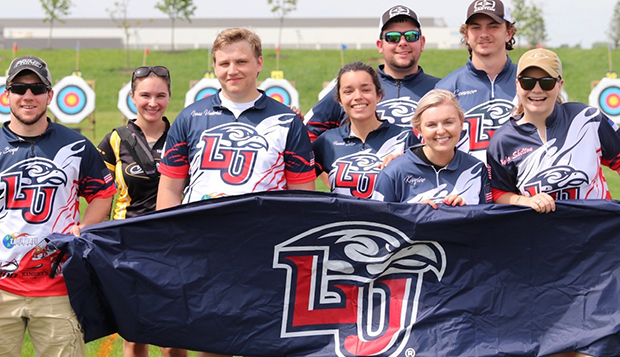 Battling high winds, six members of Liberty University's archery team wound up in a three-way tie for 33rd place out of 61 participating schools at the USA Archery Collegiate Outdoor National Championships in Dublin, Ohio, held over the weekend. It was Liberty's first time competing in the outdoor national championships, which drew a record 528 archers.

"We had a good trip considering the conditions," Liberty Head Coach Ian Rigney said. "It was very windy, especially for Sunday's individual elimination rounds when the wind was blowing at a constant speed of 25 mph. It was so bad that when they shot, their arrows would turn horizontally before they got there and stick in sideways, at about a 45-degree angle. They were compensating dramatically to even hit the target in that type of wind and there were a lot of missed targets."

Liberty's mixed compound team of graduate Louis Boyd and rising sophomore Hala Skelton experienced the most success, advancing to the quarterfinals by defeating Connecticut's Erica Gambino and Daniel Caron, 147-122, in the round of 32 and Texas A&M's Allie Blazek and J.P. Gonzales, 142-132, in the round of 16 before being edged by Michigan State's Valerie Aten and Christopher Bee, 144-141.

In the mixed barebow division, rising juniors Hannah Suber and Isaac Underhill were eliminated by California-Berkeley's Iris Li and Dennis Lee, 81-61, in the round of 16.

Individually, Skelton received a first-round bye and won her round of 64 elimination match over William Carey's Karley Mizell, 129-125, before defeating Michigan State's Grace Ertie, 138-133, in the round of 32 and being eliminated by the University of the Cumberlands' Brooke Miller, 124-115, in the round of 16.

Boyd received a first-round bye in men's compound before being ousted in the round of 32 by JMU's William Crowe, 138-133. Underhill edged Blue Mountain College's Cody Baker in his men's barebow opening draw before being ousted by Pikesville's Kyle Martin in the next round. Suber was outshot by California-Davis' Brittney Thibodeau in the second round of her women's barebow competition.

Rising sophomore Conner Rothermel finished 14th in the men's recurve event with a score of 2,189, just 33 points behind the 10th place archer and last to qualify for the finals. Kaylee Martin, who graduated on May 11, lost her opening match of women's bowhunter to Midway University's Brianna Dominey, 118-112.

"We had considerable success and they plan to go back next year and they will be more prepared," Rigney said.

Rigg announced on Monday that he is stepping down from coaching the Flames after directing the Aug. 3-4 3D archery competition for the State Games of America, hosted for the first time by Liberty and the City of Lynchburg.

"It was a tough call," said Rigney, who commutes an hour and 45 minutes each way from Halifax County, where he serves as pastor of Hitesburg Baptist Church. "I have loved being a part of the team for the past seven years, the last three as a coach. I am good at preaching and good at coaching, but I want to get really good at one or the other so one was going to have to go and God's calling is a little higher than Liberty University's calling on my life."

He plans to continue working with the team in the coming year to ease the transition for the new coach.