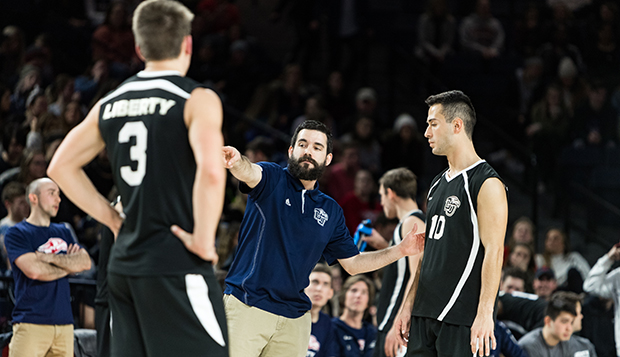 Bryan Rigg's experience as a setter on Liberty University's men's volleyball team from 2003-2006 was completely different than the past 10 seasons, which he spent coaching the rising program.

"When I was a player, we would carpool with our own vehicles to tournaments and we would all stay in the same hotel room," said Rigg, who worked with Mike Boersma, a graduate assistant on the NCAA Division I women's volleyball team, to revive the team his freshman year. "We didn't have a coach, or a budget. For uniforms, we would all get T-shirts and write our numbers on them."

The year after he graduated with a B.S. in Religion in 2006, Liberty's Club Sports department was formed with men's volleyball one of its five founding sports. Rigg went on to earn a master of divinity at Westminster Theological Seminary in Philadelphia before returning in 2010 to serve as assistant coach under former player and inaugural Club Sports Hall of Fame inductee Jonathan Willis, who he succeeded as head coach in 2011.

"The program has been on a clear upward trajectory, from being a player on a totally disorganized group to this past year, which was the best in program history in terms of the team's organization, competitiveness, and recruiting," Rigg said.

He guided Liberty to its first East Coast Championship, a program-high No. 2 NCVF Division I national ranking, and a Gold Bracket qualification at the April 17-20 NCVF National Championships in Denver, where they advanced to the Final Four for the first time.

It was the Flames' sixth consecutive trip to nationals, and they didn't have to carpool to get there — or even have Rigg serve as bus driver, as he often did to regional events — but flew as they had to their first national tournament in Reno, Nev., in 2014.

Rigg announced he was stepping down on May 1, during his acceptance speech for the Coach of the Year award at the Club Sports Choice Awards. After serving as associate pastor in recent years, Rigg was recently named interim senior pastor for Mercy Presbyterian Church in nearby Forest, Va.

He approached coaching the Flames with a similar passion and mindset as he does shepherding his flock.

"Having that background as a pastor helped bridge the gap between teaching life lessons and sports lessons and applying them to their walk as Christians," Rigg said. "The first thing on my mind was not their physical development. I was always more concerned with their character development."

"Building a successful program involves more than just coaching," Rigg said. "Recruiting made the team better. The support of Club Sports was important, marketing the team through events like Midnight Mayhem," streamed live from the Vines Center on ESPN.

"That year, we had a lot of good athletes, though not all typical volleyball players," Rigg said, including Ryan Culkin, a former receiver on the Flames' Football team, and Kevin Snyder, a former track standout at Oklahoma. "We won a lot of games that year and success breeds success. That team got the ball rolling and was trend-setters from that point."

The program added a Division II team for the 2015-16 season, headed up for the next three seasons by Culkin. He was replaced this spring by former Liberty libero Josiah Williams, who led the DII Flames to a No. 5 national ranking.

"Josiah Williams made a huge impact as a player and a team captain, and for him to switch jobs, move to Virginia, and come back to coach was even more meaningful," Rigg said.

Of the 21 players on this past season's roster, 10 were seniors and 10 were freshmen, with just one sophomore and no juniors as opposite hitter Daniel Koloff graduated in three years.

"Our freshman class was absolutely amazing," Rigg said. "They're a bunch of young Christians who are going to be doing great things with volleyball and for the Lord Jesus Christ."

He said this year's incoming class that includes sophomore middle hitter Cross Edwards, a transfer from NCAA Division I St. Francis, will be equally strong. His successor as head coach is expected to be named next month and start July 1.