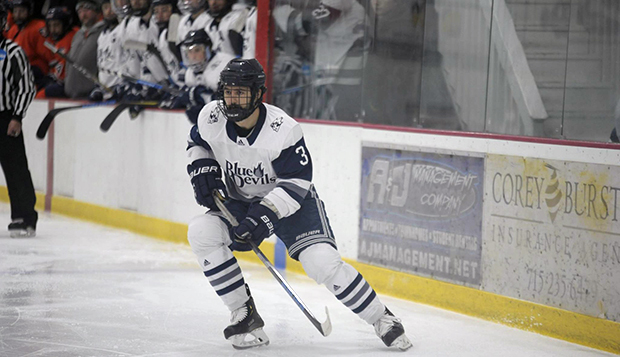 Dmytro Kobylyanski, a defenseman, was teammates with incoming forward Arturas Laukaitis this year at Wisconsin-Stout.

Dmytro Kobylyanskyi, a 22-year-old defenseman from Ukraine who was a teammate of incoming transfer forward Arturas Laukaitis at Wisconsin-Stout, committed to join him on Liberty University's ACHA Division I men's hockey team this fall.

"We do very well together," Kobylyanskyi said. "We played for two years together and now we are looking to play at Liberty together as well."

Kobylyanskyi moved to the United States when he was 15 and previously played junior hockey with Flames freshman forward Josh Fricks as a member of the Minnesota Wildnerness.

"We had seen Dmytro play when he was playing junior hockey, before he went to Wisconsin-Stout," Liberty Head Coach Kirk Handy said.

Like Laukaitis, Kobylyanskyi is looking to study in Liberty's School of Business, which will open its new building in May.

The 6-foot, 1-inch, 200-pound defenseman brings size and strength to the Flames' corps.

"I like to play physical hockey when the opportunity comes, but I don't really go searching for people to hit," Kobylyanskyi said. "I primarily like to play on the defensive end, but can also join the rush. I am trying to work on my speed all of the time, to be quicker with my feet."

It will be critical for the Flames to load up their roster with players like Kobylyanskyi and Laukaitis in anticipation of graduating 10 seniors, including eight forwards, next season.

"With such a large senior class next year, we have an opportunity to bring in some quality recruits to build around," Handy said. "It is a great opportunity for us and for those guys as well. Both of them are going to add some size to our lineup, Dymytro on the back end. These guys are going to come in and work toward being a solid part of our team."