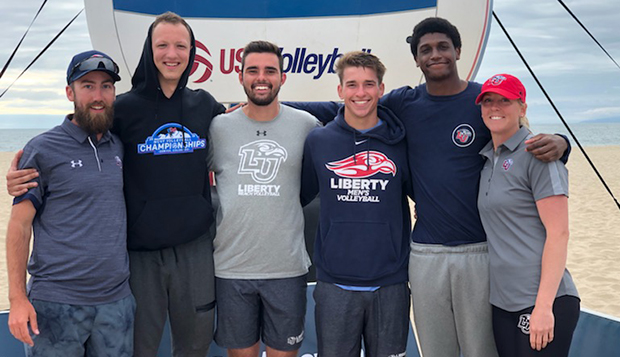 For the first time this past weekend, Liberty University sent two men's tandems to the May 9-11 USA Volleyball Collegiate National Beach Championships in Hermosa Beach, Calif.

Graduating seniors Kaden Knepper and Gene Dejesus finished 1-1 in pool play to advance to the oceanfront tournament's playoffs, staged on the day they could have been walking with their classmates at Liberty's 46th Commencement in Lynchburg, Va.

The Flames' duo, which also started as setter and middle hitter for Liberty's men's indoor volleyball team over the past three seasons, swept California-Santa Clara's Raymond Cascio and Maxwell Garris, 21-18, 21-14 in the first playoff match before being eliminated by the combination of Florida Atlantic's Adam Wienckowski and UCLA's Tim Brewster, 21-12, 21-13.

Graduate Matt Jones and rising sophomore Josh Knapp also competed in the 16-team event, but were eliminated after going 0-2 in Pool D. They lost their opener to Concordia's (Calif.) Zachary Meyer and Jordan Hoppe, 21-11, 21-17, before being ousted by UC-Santa Clara's Cascio and Garris in a tight, three-game battle, 21-11, 25-27, 18-16.