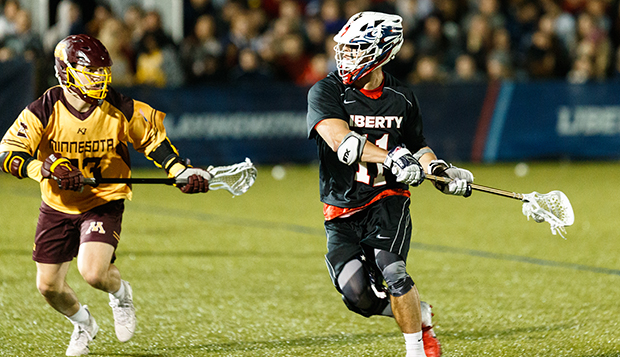 "It was good to have the experience we did at nationals and nice to see those guys get recognized," Liberty Head Coach Kyle McQuillan said. "C.J.'s first-team selection was very well deserved, especially coming off All-Conference First Team and SELC Offensive Player of the Year honors."

McQuillan recognized the contributions of all eight of his graduating seniors — including goalie Brayden Harriman, defensemen Ean White and Tyler Keen, and midfielder Chris Mickel — in helping the Flames post their first undefeated regular season at 15-0 and rise to a program-best No. 3 spot in the national rankings.

"I am thankful to the seniors who have taken this program to the next level and put us in position to move forward and have more success in the future," he said. "When they came in, our goal was to make nationals and be a top contender. Now, if I contrast the perspective of those guys with the team we have returning, that's not the goal — it's the expectation. The mindset has changed dramatically."

The Flames' (16-2) only two losses came against national champion South Carolina, which eliminated them from both the SELC Tournament semifinals and the MCLA National Championship quarterfinals. The Gamecocks, seeded third, went on to upset second-seeded Chapman in the semifinals and top-seeded California in the final.

McQuillan has shifted his focus to recruiting, with at least five incoming freshmen lined up for this fall, and the Flames' sixth-annual Summer Camp set for July 7-12 at the Liberty Lacrosse Fields.