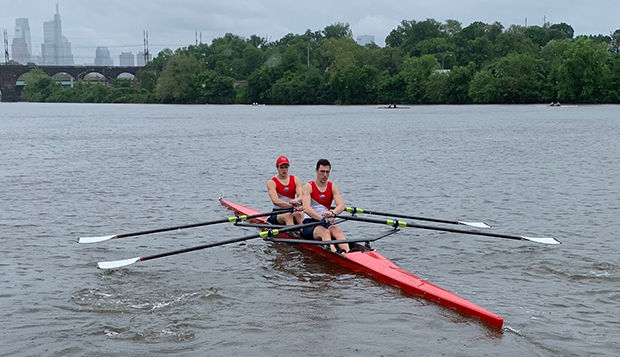 The Liberty University crew team's women's Novice 4 finished first in the B finals and its men's Double placed sixth in the Grand A finals at this past weekend's Jefferson Dad Vail Regatta on the Schuylkill River in Philadelphia.

"We did really well up there against a lot of NCAA Division II and Division III schools," Liberty Head Coach Debbie Prowse said. "It was a nice big regatta to be able to see where we fall racing against that type of competition, and a good warmup for the ACRA Championships," set for May 24-26 on Lake Lanier in Gainesville, Ga.

Freshman Lindsey Bicknell, sophomores Joanna Moran and Meredith Thompson, and junior Tori Drumheller powered the women's Novice 4 with senior Kaylee Ruiz serving as the coxswain. It placed third out of 25 boats in 7 minutes, 25.529 seconds in a 1,900-meter semifinal time trial to qualify for one of three semifinal heats of six boats, with the top two in each advancing onto the A final.

Rowing in side-by-side racing with the current but against headwinds that produced choppy conditions, the Lady Flames placed third in their semifinal heat before winning their B final in 7:40.991. Catholic placed second in 7:47.593, followed by third-place Rollins in 7:56.590.

"They crushed it and won in open water nearly seven seconds faster than the next fastest boat and they beat out some really big schools like Grand Valley," Prowse said.

Rising senior co-captains Brad Weisman and Ryan Krupansky formed one of 12 Men's Double tandems, sculling through high winds that produced waves with white caps to post a top-three finish in Friday's five-boat heat in 8:17.752 over the 2,000-meter course. That put them in Saturday's Grand A final, where they came in sixth in 7:10.436.