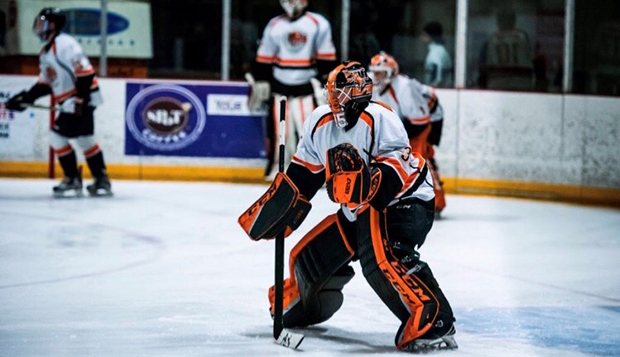 He is excited to platoon with Cedric LeSieur, another incoming goalie vying to replace graduating seniors Cole Burack and Josh Halpenny, and to work with Flames Assistant Coach Dan Berthiaume, a former NHL and ECHL goalie.

"It will be nice to have a goalie coach there daily, to have somebody there walking through and improving my skills," Myers said. "I expect it to be a great competition (with LeSieur). We've got to be there for each other and cheer for each other, being the other's biggest fan."

Myers visited campus last month, when he stayed with rising senior forward Brock Thompson and met defenseman Jacob Fricks. He is eager to meet the rest of the Flames' defensive corps during preseason camp in August.

"Liberty is a pretty awesome place," he said.

Myers first played hockey at the age of 5 growing up in Colorado.

"I never wanted to be goalie, but my coach forced me to the first game and it kind of stuck," he said. "It was fun. I still play forward in the offseason, to change it up, but now I love goalie. It is what I was made to do, honestly."

At 6-feet, 210 pounds, Myers' size gives him an advantage at his position.

"It helps me out where there are battles in front of the net, and I don't get pushed around too much," he said. "Plus, I can usually look over or around people when there are screens in front."

He expects to face faster skaters and more physicality in the ACHA.

Prior to signing with Buffalo State, Myers spent three seasons in the NA3HL with the Texas Brahmas, where he posted 19 shutouts and set team records for games played (84) and wins, going 61-19-4 with a sub-2.00 goals against average, and a 92.3 save percentage.

Off the ice, he won the NA3HL's community service award for the 2017-18 season after participating in every event for the Brahmas — from delivering goods for Hurricane Harvey relief in Houston to going to area elementary schools on National Read A Book Day.

After studying criminal justice at Buffalo State, Myers may switch his major to psychology at Liberty. He is especially looking forward to playing for a Christian school with teammates who will sharpen him spiritually.

"Everywhere I've played, I've been able to express my faith, but at Liberty it is different, being surrounded by people that share the same values," Myers said. "I can grow in my faith and express it more freely and thrive."