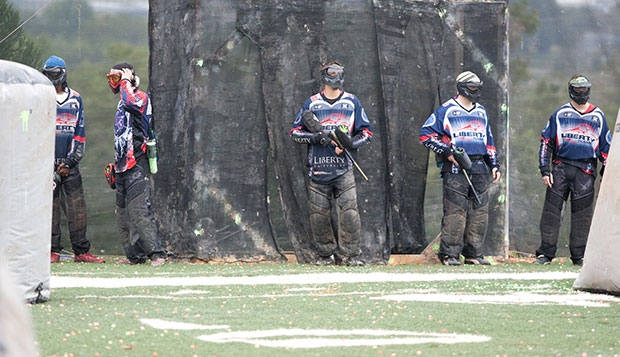 Both of the Flames' two five-man teams faced off against Central Florida, Georgia State, Georgia Tech, and N.C. State in pool play. Liberty's Red team, led by junior Noah Burns' standout performance, placed sixth out of 10 teams with a 2-2 record while the Blue team, anchored by Bobby Majuk's consistency under fire, finished eighth despite going 0-4.

"These teams were really good teams, some of the better teams in the country, especially Georgia State, Georgia Tech, and Kennesaw State, which we did not meet," Liberty head coach Todd Hoglund said, noting the Flames split two matches with the Owls in their Nov. 4 season opener in Lynchburg. "This gives us a really good look at what we're going to have at our home event on March 30 (and) some of the teams that will be competitive at nationals."

Liberty has placed fourth, fourth, and third, respectively, at the past three Class A national championships.

"That's usually where we perform really well," Hoglund said. "Today, for Class AA, it was a different format and these were some of the best teams we've faced in a while, which is why we didn't do as well, that and the playing conditions."

All paintball tournaments are played on fields of regulation size, but this particular grass field was wet and worn, exposing some of the Georgia clay beneath the surface.

"The field was very muddy," Hoglund said. "Some fields are turf, some are grass. Today, we played on a lot of mud. We're so used to playing on the turf of our home field that going from turf to mud was very different."

He said that made the eight-hour trip worth the time and cost involved.

"It was really good to get outside and away from the home field advantage we have," Hoglund said. "It was good, almost like a wakeup call for some of our players, and good tournament experience for the newer players, who haven't really had any yet. It gives them direction as to what we need to focus on in practice."

He said communication is a key facet the Flames need to work on, along with laning, which involves taking away opponents lanes of attack by firing through them, and also recovering from being down.

"If you get shot once, you're eliminated," Hoglund said. "We started games, pretty early in the game, shorthanded. If we lose a body … being on the wrong side of a power play, we've got to work on coming back, not panicking at that time."

Though the Flames were at full strength, they lost 12 out of 15 players from last year's team to graduation, or other sports, and are in full rebuilding mode. Hoglund hopes traveling to an event like Saturday's will open his players' minds to ways they can improve their games.

"To play against somebody else, they give you another look," he said. "We saw some things we weren't expecting. At times, things didn't go according to our game plan, so we had to adapt.

"You definitely go into a game with a strategy, realizing that strategy will need a shift," he added. "You might have a play in mind and they have something that totally counteracts that play. How quickly in the game you can adjust," and formulate a new game plan determines a team's rate of success.

The Flames have seven weeks to fine-tune their game plans and execute their strategies in preparation for hosting MSCC Class AA event No. 4 on March 30.